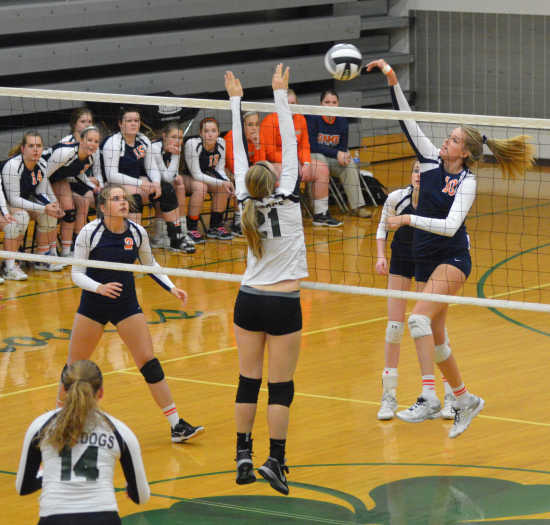 North Putnam sophomore Taylor Nauert rips a big hit for the Cougars during their match against Monrovia on Thursday. The win helped North Putnam advance to the sectional semifinal on Saturday. (Banner Graphic/TRENT SCOTT)

The Cougars, who had won in four sets in their previous meeting Oct. 1, instead needed just the minimum three sets to knock the Bulldogs out of the sectional 25-21, 25-20 and 25-11.

North Putnam head coach Brandy Dickson said that having played Monrovia once already helped gear the squad for the match.

"I think we knew what to expect this time," Dickson said. "I thought we started a little slow and it took a while to get in the hang of it. We knew what their setter's tendencies were and we needed to take the setter out of the game."

North Putnam shot out of the gates quickly and gained a 6-0 lead before a serve into the net put Monrovia on the board. The Cougars followed up with another solid stretch that moved them ahead 14-7.

The Bulldogs closed to within three at 17-14 before North Putnam stretched the lead back out to six at 23-18. Three straight points for Monrovia briefly left the set in doubt but an over hit ball and a kill by sophomore Adri Millican settled matters in favor of the Cougars.

Neither squad could find an advantage in the early stages of a stop-start second set, though the Cougars picked up a few more early points than Monrovia produced.

North Putnam was able to control the set by not allowing the Bulldogs a chance to hold the serve for more than three points. As the Cougars began to gain separation late at 20-15, Monrovia's inability to string together points led to a 25-20 defeat and 2-0 hole in the match.

After two sets of play, Dickson said the squad, even in a winning position, was feeling frustrated at its inability to put the sets away quicker.

"We needed to work on stringing together more points at a time," Dickson said. "We weren't putting the ball away and that's one thing we had worked on. We did much better of doing that in the third set."

Bowling hit a pair of aces that helped stretch an 8-5 lead out to 15-5, staggering the Bulldogs before Nauert dropped Monrovia for good over the final six points. Nauert finished off the final six points with three aces, including one to finish the match at 25-11.

Dickson said the squad was better in the final set of the match at getting points in bunches.

"Our goal was to get three to five points at a time and that's what we focused on," Dickson said. "I know they were disappointed in the first two sets of how many points they allowed. One of our goals in the third set was to decrease that number and we did that."

North Putnam will face Class 2A No. 3 Speedway on Saturday and Dickson said that the squad needed to look beyond the ranking and play to its potential.

"Blocking is going to make a huge impact," Dickson said. "We need to find any opening that they might have. We have to bring our A game because this is the most challenging team here.

"I'm a firm believer that anything can happen in volleyball and we're coming into the game Saturday with the same record that they are: 1-0.

"We'll scout them a little bit tonight and I hope we don't psyche ourselves out, but put everything out on the court and do the best we can."