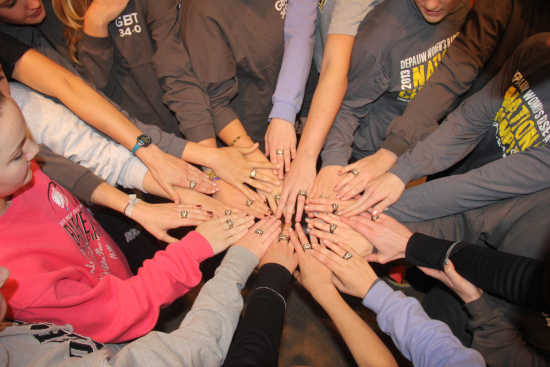 The DePauw women's basketball team begins its national championship defense on Friday at the Franklin Tip-Off Classic against Oberlin but while returning players have been preparing with practice and a pair of scrimmages, the championship season wasn't over until Sunday.

They needed their rings.

"There's one piece of unfinished business to take care of from last season," DPU head coach Kris Huffman said to kickoff the ring ceremony on Sunday. 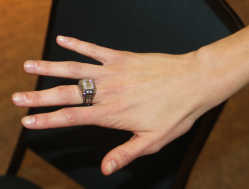 All but one player from the 2013 champs received her ring Sunday, including the three outgoing seniors who led the team in their final collegiate season.

The ring ceremony took place after DePauw hosted a scrimmage against Transylvania University in its final tune-up for Friday.

Parents received an email two weeks ago to invite them to watch the presentation, but the journey to these rings began much earlier than that.

When DePauw won its first national championship in 2007, the team selected rings that were unassuming and modest. They were small, unimpressive and didn't reflect the magnitude of the Tigers' accomplishment.

The 2013 championship title game was on March 16 and the celebration had players forgetting all about the ring, at least until the next day.

Or, for sophomore Colleen Frost, until someone asked to measure her finger.

"People always say you get a ring when you win the championship," junior Lauren Abendroth said. "We got back to campus and a couple weeks after we got email from coach Smith who told us we need to meet with a Jostens rep to go over mockup designs for our rings."

Assistant coach Mary Smith was charged with helping to select the 2013 championship ring, and the experience from last time. 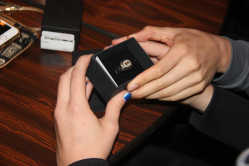 A Jostens representative brought several examples of championship rings from other sports and seasons, and the players all voted for the colors, size and design specifics, a black backing with gems on the front spelling "34-0," a DePauw D logo on one side and the players' name, number and the letters GBT (for girls basketball team) on the opposite side.

Each champion was able to select on which finger she would wear her own ring.

The synchronicity the players had with the ring selection was symbolic of the way the team played last year, with near complete agreement and happy compromises.

The rings were a gift from the DePauw athletic department, which also picked up the tab for team to visit the White House this summer. The Tigers have also received a trophy, a Fossil watch and numerous memorabilia, hats and shirts since the championship.

Abendroth said she has no plans to ever take the ring off, except during practice and games, and Huffman said there will be no limits as to when the players are to show off their bling.

The same might not go for Huffman. While she passed the rings out to all the players and coaches, she said she had yet to try on her own. That includes the 2007 championship ring, which she said she'd never worn and might struggle to find in her home.

Like everything else, the players get to benefit from their hard work while the coaches get the benefit of more work. 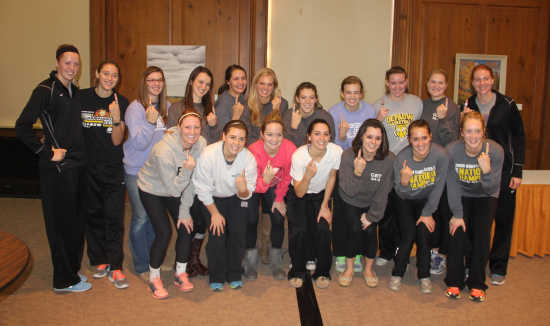 The 2013 National Champion DePauw women's basketball team throws it up once more, this time with a ring on their No. 1 finger.