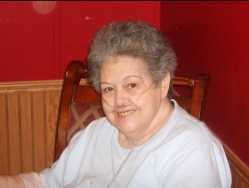 She was born on April 17, 1941 in Clay County to George Treash Sr. and LuElla Neal Treash.

Linda had been employed in the Jewelry department at Wal-Mart and had worked in Food Services at DePauw for 16 years.

Funeral services will take place at 10 a.m. Thursday, Dec. 5 at Hopkins-Rector Funeral Home, with Chaplain Ron Turner officiating. Interment will follow at Brick Chapel Cemetery. The family will receive friends from 5-8 p.m. on Wednesday, Dec. 4 at the funeral home.

Linda enjoyed playing bingo, but most of all will be remembered for her love of family and her adopted cats.