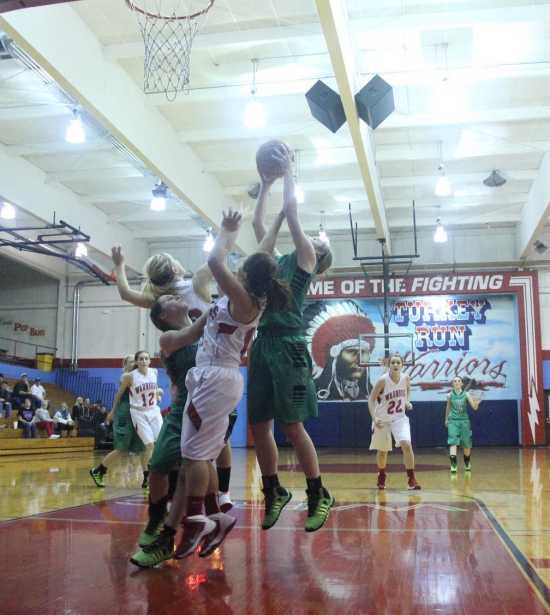 Cloverdale junior Laura Worthington leaps above the crowd to haul in an offensive rebound in the second half.

Stevens, a junior, had 16 points before fouling out in the final few minutes and Dorsett, a sophomore, finished with eight points but got the Clovers going after trailing early.

The Clovers, without two of their top forwards, started a five guard lineup for the second time this year and battled in the post against a physical team of Warriors.

Cloverdale (2-5) had more rebounds in the first half -- 20-18 -- against the more traditional Turkey Run (1-5) lineup. Junior Laura Worthington led CHS with 10 boards.

The Clovers trailed 9-6 late in the first quarter when Dorsett took command their offense, driving to the lane, drawing a foul and finishing another layup to put her team ahead 11-10 after the first.

"Payton Dorsett had a great game tonight," Langdon said. "When she gets into the paint she is very dangerous. I thought she had kind of a breakout game. She did a lot of good things tonight."

Following Dorsett's lead, Stevens knocked down a 3 early in the second quarter and starting driving to the basket herself to spark a run that put the Clovers up by seven at halftime. The team's 17-point second quarter was the most in any quarter for the team this year.

With the lead in hand, the Clovers set to playing some of their best perimeter defense of the season in the second half. Turkey Run was just 7-for-26 from the field in the second half and the CHS lead continued to expand as a result.

Were it not for a deficit on the boards, the undersized Clovers likely would have built an even bigger lead.

"When you're small, it takes full focus," Langdon said. "We're trying to work some more people and get some guards some two minute breaks and I think that will help."

Cloverdale is off until Monday when it hosts Eminence at 7 p.m. before beginning West Central Conference play on Friday against Greencastle.