A 21-year-old Greencastle man, who had been charged with murder in the stabbing death of his father, pled guilty Tuesday afternoon to voluntary manslaughter in the September 2012 case.

After being incarcerated on a murder charge the last 15 months for the death of his father, Tommie Dale Badgley, 53, it took less than 15 minutes Tuesday for Thomas W. Badgley to plead guilty to a new charge of voluntary manslaughter.

At the outset of Tuesday's brief hearing before Superior Court Judge Denny Bridges, Putnam County Prosecutor Timothy Bookwalter presented a petition to withdraw Count I, the murder charge, against the younger Badgley. 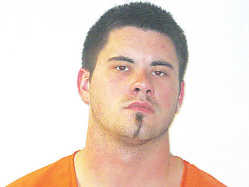 In its stead, Count II, voluntary manslaughter, has been filed as a Class A felony with a sentencing range of 20-50 years in the Indiana Department of Correction (DOC).

Badgely uttered few words in court Tuesday, essentially responding only to the judge's routine courtroom questions about understanding the charges and substantiating his signature on legal documents.

Judge Bridges then accepted the guilty plea from Badgley and ordered a presentence investigation.

The fact the defendant has no criminal record and his youth (age 21) are factors that could weigh into sentencing, which Judge Bridges set for 1 p.m. Wednesday, Feb. 5.

The judge will allow one hour for the sentencing hearing, during which the prosecution is expected to argue for the maximum 50-year sentence and the defense will make its case for the minimum term of 20 years.

Circumstances leading up to the fatal stabbing evolved after the defendant's roommate became concerned for his friend's safety, thinking Badgley had overdosed on several pills (later determined to be Tylenol).

Court documents indicate the roommate called Badgley's parents, Tommie and Debbie, who rushed to the scene intent on getting their son to go to the Putnam County Hospital emergency room.

Reportedly his father sternly advised, "We have to get you to the hospital" before a struggle ensued.

The defendant reportedly responded by standing up and swinging his fist at his dad.

That caused the elder Badgley to swing back while asserting, "I am not going to stand here and watch my son die," court documents note.

In a statement to police, the roommate said he witnessed Thomas Badgley removing a knife from a kitchen drawer before the roommate went outside and dialed 911.

Court documents also note that Mrs. Badgley reported seeing her son lunge at her husband as an altercation commenced before the fatal stabbing.

An autopsy revealed the victim died of a single stab wound that entered between two ribs and perforated his heart.

Thomas W. Badgley has been held without bond at the Putnam County Jail since his arrest on Sept. 12, 2012.