Community Hub gets clean-up as reopening of shelter looms

About three-dozen DePauw University staff members enjoyed spending Friday afternoon out of the office. Not to tie up loose ends on their Christmas shopping, roast chestnuts by an open fire or even create snow angels in the new-fallen fluff. 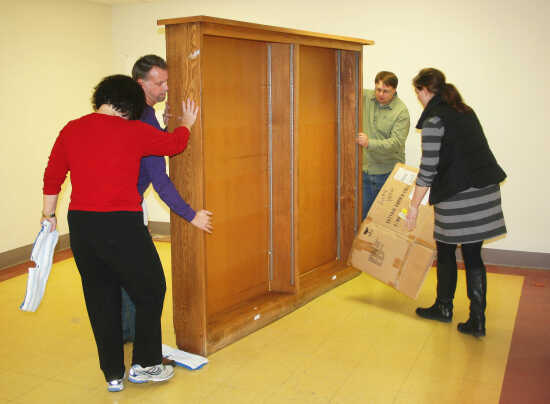 Volunteers from the Division of Development Alumni Engagement at DePauw University help ready the former A-Way Home shelter, now known as the Community Hub, for its reopening. Wendy Jackson and Page Cotton make up bunk beds, while Melanie Norton (in red) supervises the moving of a large bookcase and Steve Setchell leads the relocation of a table down the hallway.

Quite the contrary. For in a selfless act of community spirit and cooperation, the group from DePauw's Division of Development and Alumni Engagement tackled a major clean-up at the former A-Way Home, the once and future site of the local homeless shelter.

Now known as the Community Hub after the building at 309 E. Franklin St., Greencastle, was purchased this fall by local businessman Bob Jedele and DePauw Major Gifts Officer Matt Mascioli, the facility is expected to house not only a revived homeless shelter but the offices of the Greencastle Housing Authority and the Beyond Homeless Inc.

The work-day objective Friday was to get the premises back in shape for occupancy, Beyond Homeless spokesman Bill Wieland advised. 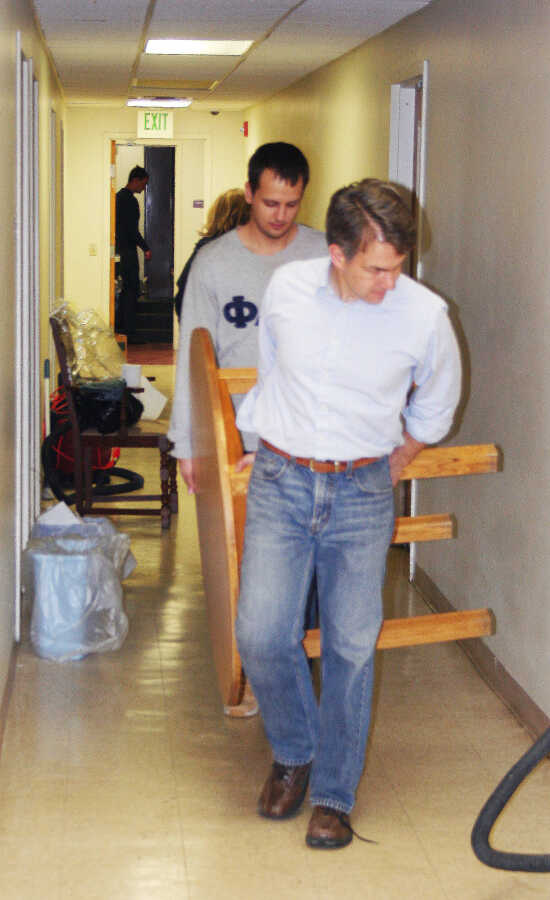 Wieland briefly addressed the volunteers during a break in their activities moving bookshelves and other furniture from the front of the building to the rear and rearranging bunks beds in the sleeping quarters.

"I am delighted and grateful that you took your afternoon out to help here at the shelter," Wieland praised. 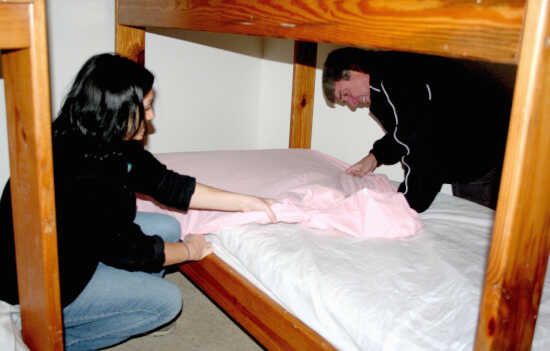 Their efforts have helped accelerate the long-awaited reopening of the homeless shelter, closed since Sept. 10, 2011 after serving 2,500 homeless people over its 15-year lifetime that began in July 1996. That reopening could come before the end of the year, Wieland said.

He said he remains "cautiously optimistic" that the homeless shelter could be in operation before the calendar turns the page to 2014, telling the volunteers it remains "a distinct possibility."

Spontaneous applause broke out when Wieland reported that Beyond Homeless has been successful in obtaining its 501-C-3 non-profit status, for which he heaped praise upon the Felling and Felling law firm for its work in shepherding the effort through a tedious legal process.

"Matt (Mascioli) and I see this as a major development for Beyond Homeless Inc. and the community," Wieland noted.

As Cotton and Jackson tugged twin-bed sheets into place, he cheerfully noted that many of those sheets actually had come from his home closet.

With the Cotton children now grown and having moved away from home, he and wife Narda have little use for twin sheets with soccer players and Care Bears, and have donated the bed linen to the shelter.

Norton, who arranged for the volunteers from her DePauw division, was ecstatic about the overall response.

"I really appreciate everyone being here. This is what the holiday spirit is all about."