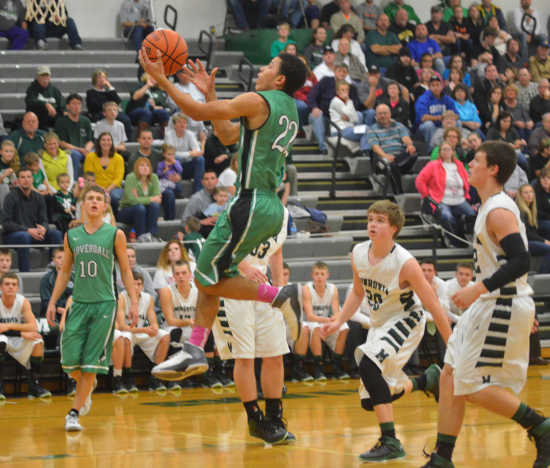 Cloverdale junior Marquise Moore scores two of his 38 points against Monrovia on a layup during the first half on Friday. (Banner Graphic/TRENT SCOTT)

MONROVIA -- The Cloverdale boys' basketball team traveled to Monrovia Friday night questing to start its season off with seven wins and no losses. The Clovers prevailed, led by junior Marquise Moore, 72-50.

CHS (7-0, 2-0 West Central Conference) are starting what could be a memorable season. The Clovers played a winless Bulldog squad (0-5, 0-2 WCC), and took control with early first half scoring.

Moore tallied 38 points total, with 29 of them were in the first half. He finished 12-for-14 from the field and was a perfect 4-of-4 behind the arc.

Moore was a leader for his team.

"We had some turnovers, some myself. When we got down I just kept encouraging my team to keep playing," Moore, the Clovers' point guard, said.

Moore was dominant. He got his way whenever he wanted it. He and freshmen Cooper Neese were the big duo of the night.

Three times Neese found Moore for an open layup. Two of the layups were created by well-executed, acrobatic passes from Neese.

"Our team had confidence in us. They build around us, and that's what we do. We get them hyped up, and when we score, they score," Moore said.

"When you can drive (the ball) it creates opportunities for outside shots. We were able to get open shots," CHS head coach Pat Rady said.

Toward the end of each quarter, MHS did create a little pressure on Cloverdale at times. The Bulldogs got the pace in their favor, and they created fast mini-runs scoring six to eight points in a row before the Clovers could get a good handle.

The Clovers stopped the Bulldogs' momentum by hitting a big three or scoring an uncontested layup.

Everything seemed to go the Clovers' way. They were making most of their shots, passed the ball well, they fouled at a low number and committed minimal turnovers.

The Bulldogs had its chance to make a big comeback hitting 50 percent of their two point shots, but they could not hit the 3s. Only hitting 3-of-14 from behind the arc played a big difference in Friday's outcome.

The Clovers got good contributions from the whole team. The second half, when Moore was not scoring, his team was able to make big shots and get major rebounds.

"I want to thank my team. If it wasn't for them none of this was possible," Moore said, "I was feeling sick at the beginning of the game, and my team kept encouraging me to just keep playing.

"I thought tonight we were excellent from the start of the game to the end. We had great movement on both ends of the floor," Rady said.

CHS had a big category on the night that can't be over-looked, defense. The Clovers had 10 big steals which lead to eight fast break points. CHS forced 20 total turnovers. The pressure made the Bulldogs uncomfortable, forcing them into tough passes.

Rady was happy on how the defense played. He thought the best part was holding Monrovia to four points in the third quarter.

Rady's biggest compliment was the support from his team's fans. He was thrilled by the turn out, and he believes it is the biggest road turnout in a long time. He wants the fans to keep piling in the rest of the season.

The Clovers' 7-0 start is its best since 1982 when it began the season 24-0 before losing in the regional championship.

Cloverdale will attempt to extend its streak on Saturday at 7:30 p.m. when it hosts the Tri-West Bruins (3-1).