Editor's note: This is the first of a two-part series recalling the tragic events of the Jan. 2, 2004 death of Putnam County Sheriff's Department Capt. Jim Baugh, his life and his legacy. 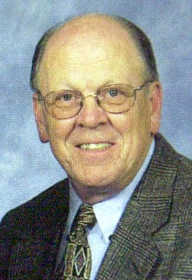 It will be 10 years this Thursday since the tragic death of Capt. Jim Baugh, the longest-serving deputy in the history of Putnam County. His Jan. 7, 2004 funeral procession was marked by the hearse passing beneath a large American flag on the courthouse square. 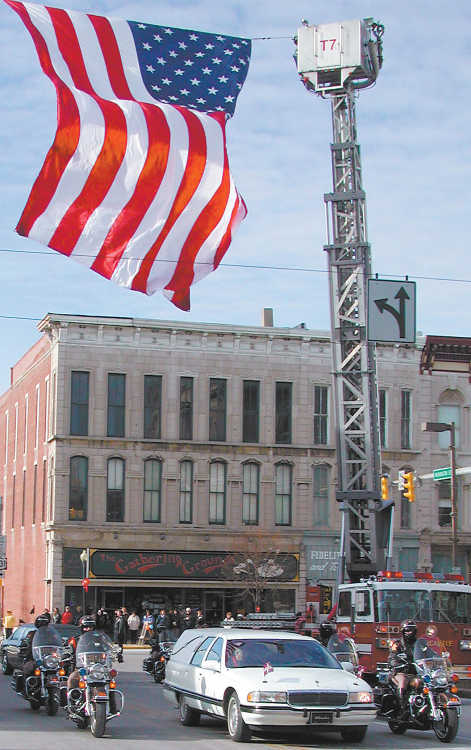 A damp, foggy mist shrouded the Putnam County landscape 10 years ago this Thursday as the second day of the new year was about to yield to the first weekend of 2004.

A bone-chilling Friday, however, was providing a shivering reminder that despite an absence of snow and single-digit temperatures, it was still winter in west-central Indiana.

Capt. Jim Baugh was on duty that day -- Jan. 2, 2004 -- as he dutifully had been for 32 years as a deputy and former two-term sheriff for the Putnam County Sheriff's Department.

At 60, the longest-serving merit deputy in the history of the county, Capt. Baugh was less than four months from retirement that fateful day as he anticipated a routine post-holiday evening and perhaps a chance to enjoy dinner with family and friends at the Final Approach restaurant at the local airport for the first time.

That all changed, however, as he was dispatched to what was reported as a minor property-damage accident north of Greencastle about 4:30 p.m.

In the 15 minutes that followed, the world was turned upside down for the Baugh family and forever changed for Putnam County and Indiana law enforcement.

Heading northbound out of Greencastle, Baugh passed the area initially thought to be the accident site and continued past Windy Hill Country Club, the Putnam County Fairgrounds and up winding Water Works Hill. Not finding an accident scene, he turned his squad car around at the top of the hill and proceeded back south to double-check roadside areas for a potential accident victim.

Witnesses to what followed recall seeing the southbound police car jolt to the west and come abruptly back east, striking the guardrail on the east side of U.S. 231, north of the bridge over Big Walnut Creek. The car hit an embankment, flipped onto its top and slid down the rain-dampened slope into the creek.

The prevailing theory is that a front strut broke on the car, causing the erratic behavior of the vehicle, Baugh's oldest son Jerrod said in recalling the tragic events for the Banner Graphic as the 10th anniversary of the accident approached.

However, the right front tire of the car was never found, despite dive team members "looking up and down the river," he said.

While that will always leave an open question as to what actually caused the officer's fatal accident, Baugh's wife of 39 years, Lauralee takes solace in the fact that her husband most likely never knew he went into the cold creek water that afternoon.

"He was deathly afraid of the water," she said during an emotional interview about her husband's life, death and legacy.

Apparently he nearly drowned as a child in a cistern mishap and carried the scars of that into adulthood.

The autopsy stated that the fatal injuries were caused when impact in the collision crushed Capt. Baugh's sternum, which punctured his heart, Lauralee noted.

"He was dead before he went into the water," she reasoned.

Another indication was that the meticulous interior of Capt. Baugh's squad car remained intact.

"He was the Velcro king," son Jerrod said, noting that his father kept items securely velcroed within arm's reach, including his radio microphone and a gadget that could be used to cut through a seatbelt in an emergency. It went untouched that fateful day.

"I don't believe he ever knew he was in the water," wife Lauralee added.

"When they brought him up out of the river, I knew he had passed," she said, understandably choking back emotion. "But the rescuers refused to give up. They were bound and determined to take him to Indianapolis, but with the weather like it was that day they (LifeLine helicopter) couldn't fly.

"By the time we got up there to Indianapolis," she added, "there must have been 50 to 60 officers there. The look on their faces to know Jim was gone was just unbelievable."

Jim Baugh was to have retired in April that year, and with all the sick days and time off he had accumulated, he wouldn't have had many days left to work when the tragic events of Jan. 2, 2004 intervened.

In the aftermath of his death, more than 1,000 people attended services five days later at DePauw University's Lilly Center before his procession passed through Greencastle en route to his final resting place at New Providence Cemetery in Jefferson Township.

"It's just a haze," Jerrod confides, thinking back on the service and public reaction to his father's death.

"There were so many comments," Lauralee recalled, noting that she remains indebted to DePauw University for videotaping the service, although regrettably no one was able to capture the many signs and citizens along the route to the cemetery.

Those memories and many more come flooding back for the Baughs and the public as the 10-year anniversary approaches on Thursday.

"This is a benchmark for us," Jerrod Baugh said, noting that a private 10-year remembrance is planned for the family (which, of course, includes Capt. Baugh's other son, Jason). The Baughs will gather with many among the group of people who were on the scene that night, along with the radio dispatchers who worked the accident, to provide some closure.

The fact that it has been 10 years since Jim Baugh's passing seems impossible to those who vividly recall that day and the outpouring of grief that followed like it was yesterday.

"Everybody says they can't believe it's been 10 years," Jerrod said. "I know I'll have 19 years in law enforcement in, but to think half of it is without him ..."

With that, his mother looked across the table at her fortysomething son who so obviously resembles his father.

And like his father before him, Jerrod has been teaching firearms training classes at the Indiana Law Enforcement Academy the past dozen years. He invariably wraps up the class with a little let's-be-careful-out-there police logic.

"I always end with 'Hey, guys, the most important thing you can do when you wrap up every shift is to put your car in park in your own driveway. Do whatever it takes to make that happen for your family.'"

A lasting memory for Jerrod was what was said to the Baughs at the funeral by the state trooper presenting the folded American flag from the casket to Lauralee.

"So his legacy is still out there working."

Friday: The legacy of Jim Baugh.