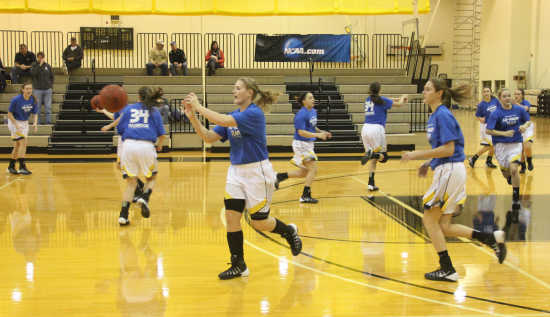 DePauw's players all wore their warmup shirts tucked in prior to the Amy Hasbrook Memorial Tournament games in memory of the university's former player. (Banner Graphic/GRANT WIEMAN)

Amy Hasbrook graduated from DePauw in 2000, but while her career records have been surpassed and the team has reached unprecedented heights since her era ended, Hasbrook remains an important part of the top Division III women's basketball program in the country.

Hasbrook died in a house fire in 2002 but her impact on the Tigers' coaching staff and program has only grown in the years since. The Amy Hasbrook Memorial Tournament began in 2004 and has helped DePauw kick in the New Year since 2008-09.

"I know Amy Hasbrook was a huge part of the DePauw women's basketball team," DePauw junior Savannah Trees said Monday after winning MVP at this season's event. "It's great to be able to win it for her and (in memory) of everything she's done for DePauw."

The Tigers wore commemorative warmup shirts with Hasbrook's name and No. 34 scrolled on the back and every member of the roster had the shirt tucked in to her shorts, just as Hasie did during her playing days.

The number 34 has significance beyond just Hasbrook's tournament. Four players have worn the number since Hasie--Colleen Powers from 2001-2005, Andrea Travelstead from 2005-2009, Kathleen Molloy from 2009-2013 and freshman Taylor Howard this year--and each has had to carry the Hasie legacy.

Molloy embraced the tradition, removing her jersey after milestone wins last year and displaying it for photos in the memory of a player she'd never met.

DePauw players don't generally choose their own numbers, partly because of a limited supply -- the Tigers don't have any single-digits or numbers in the 50s, so there's a maximum of 24 for the roster of 20 -- and partly because assistant coach Mary Smith assigns them with players in mind.

Howard, a defensive-minded forward, drew the Hasbrook assignment this fall. It didn't take long for her to understand the history. She first heard about Hasbrook soon after being assigned her number.

"I didn't hear the full story until a couple of weeks after," Howard said. "I was like, who is Amy Hasbrook? ... One of the girls told me the story."

Howard said after finding out about Hasie and the history, the number seemed more like an opportunity than a burden, one that she embraced.

"I don't even think it's because I have her number," Howard said. "When you hear about her legacy, it just makes you want to play like that, just because she was a hard-worker in general."

Senior Alison Stephens is one of the players who is now passing on some of the Hasbrook legends.

Stephens heard about Hasbrook when she first started at DePauw nearly four seasons ago, and she has passed it along.

"As a freshman, she didn't play a minute," Stephens said. "Her sophomore year, they couldn't keep her off the court because she was such a good boarder."

That passion, work ethic and will to improve is part turned Hasbrook into a star for the Tigers. She finished her career as the school's leader in field goal percentage (65.2) and is fifth in career rebounds with 682.

She also went from watching from the bench as a freshman to become an all-conference player as a senior. For the talented current roster, playing in the Amy Hasbrook Memorial Tournament is a reminder that mixing in some of Hasbrook's talents is another part of what it takes to win.

It also shows that hard work is not forgotten.