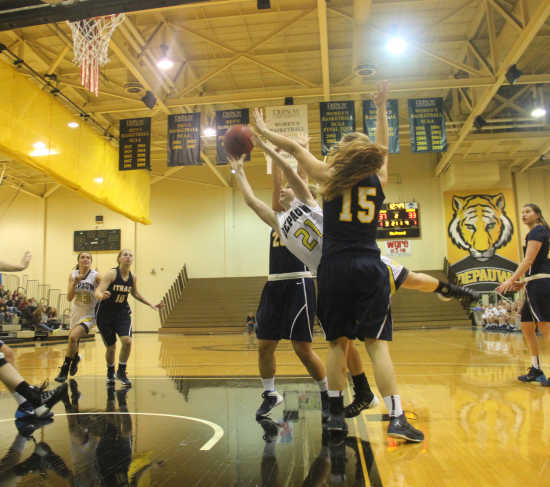 DePauw junior Savannah Trees dives between two defenders to score a layup in the second half against Ithaca on Monday. Trees had 21 points in the win and was named tournament MVP. (Banner Graphic/GRANT WIEMAN)

Still unbeaten and ranked No. 1, the DePauw women's basketball team is quickly finding staying on top will take a little more in-game work than getting there.

In beating Ithaca in the championship of the Amy Hasbrook Memorial Tournament on Monday, the Tigers were pushed into the second half of the 65-47 win.

"We definitely talked a lot in the last few days about playing in Hasie's honor and memory," DPU coach Kris Huffman said. "She would have loved a game like this; a battle to the end and kind of leaving it all out on the court." 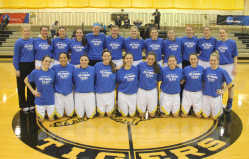 We're thankful that we're able to keep this tournament going in her memory."

The Tigers (10-0) aren't a group to complain about working hard, particularly during the Hasbrook tournament.

First held in 2004, the tournament is dedicated to former DPU player Amy Hasbrook, a blue-collar star who left an impression on her coaches and the current generation of players.

DPU senior forward Alison Stephens, a member of the all-tournament team, said although she didn't meet Hasbrook, who passed in 2002 in a house fire, the Tiger legend left a mark on the program and herself.

"It's always an effort for me to get boards, because I know it's my job," Stephens said, "but in this tournament it's more intentional because of the nature of the tournament.

"... Amy Hasbrook's legacy is rebounding-machine. ... All rebounding is is a will and an effort, and that's the nature of the tournament." 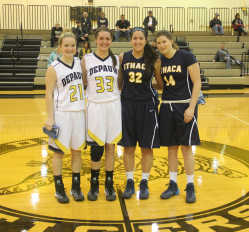 Stephens had 12 points and 12 rebounds in the championship game, including a momentum-shifting 3-pointer that came after Ithaca cut the Tigers' lead to just four midway through the second half.

DPU junior guard Savannah Trees was named tournament MVP after scoring a game-high 21 points, 16 of them in the second half.

Trees and Stephens turned up their intensity to help DePauw pull away and extend its lead to as much as 20 points late in the game.

"I think as a team we just need to be more aggressive and the plays we were running allowed me to do that," Trees said. "There was a lot of deserving (MVP candidate) people on our team."

Stephens and Trees were joined on the all-tournament team by Ithaca's Francesca Cotrupe and Mary Kate Tierney, Mallory Pruett of Alma and Caitlin Bischoff of Hanover.

Cotrupe and Tierney combined for 22 rebounds in the championship game with Cotrupe grabbing 16 of them. Their effort in the post led to a 41-33 advantage on the glass for Ithaca, just the second time in the past two seasons DePauw has been outrebounded by an opponent.

"It's always disappointing when you lose by that much, especially when you're known to be a good rebounding team," Stephens said. "We kind of got our butts whipped, but it's a good wakeup call for everybody, including myself."

Despite the rebound deficit, the Tigers physically battled the Bombers throughout, forcing No. 16 Ithaca into 18 turnovers and just 35 percent shooting.

The Tigers didn't shoot much better, going just 21-54 (38.9 percent) for the game, but they also made 18 more free throws than Ithaca.

"As long as we keep bringing everything, we're still going to continue to win games. We're No. 1 for a reason and if we remember that, day to day, we can push through any obstacle."

While DePauw hasn't rolled through the early part of the schedule as it did on the way to the national championship last season, Huffman said she's confident the ceiling for her new team is similarly high.

The talents are different, but not necessarily worse.

The Tigers have a short break before traveling to Allegheny on Friday at 6 p.m. and Hiram on Saturday at 2 p.m.

Proceeds from the weekend tournament benefit the People's Burn Foundation of Indianapolis in Hasbrook's memory.