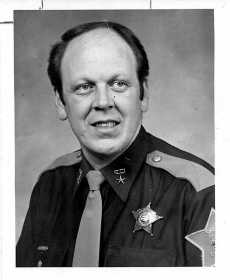 Capt. Jim Baugh in his days as sheriff.

Editor's note: This is the second of a two-part series recalling the tragic events of the Jan. 2, 2004 death of Putnam County Sheriff's Department Capt. Jim Baugh, his life and his legacy.

Like virtually every good son would, Jerrod Baugh eagerly cherishes any moment he can talk about his father, the late Capt. Jim Baugh, and help keep alive the legacy of the longest-serving deputy in Putnam County history.

A veteran Indiana State Excise Police officer himself with 19 years now in law enforcement, Jerrod easily relates story after story, tales that often simultaneously bring a smile to his face and lump to his throat.

It never matters whether he's instructing shooters at the pistol range, comparing notes with fellow officers or chatting with a reporter about the life, death and legacy of his dad, who died tragically 10 years ago Jan. 2 while responding to a routine property-damage accident on U.S. 231 north of Greencastle.

"I prepared some crib notes," he confessed, producing a small scrap of paper to show the Banner Graphic in recalling the tragic events of Jan. 2, 2004 and the legacy of Jim Baugh that continues to live on.

"On top of the list ... 'Work and fun,'" Jerrod stressed before launching into another story of Capt. Jim Baugh and the myriad of people he touched and incidents he encountered over 32 years with the Putnam County Sheriff's Department and four as a Greencastle City Police officer.

"People still come up and start a story with, 'Did I ever tell you the story about your dad and I?' There's probably 100 stories of people and the odd ways he would get involved," Jerrod recalled.

"With this profession being as serious and at times as dangerous as it can be, sometimes it's the funny stories that can make a friendship forever. He was the king of that."

Those stories are as endless as the memories and the legacy.

There was the flying fish that wedged under the blue light atop his vehicle after an owl dropped it when struck by Baugh's squad car on a response. Or the time he had pink elephants painted on the drunk tank walls at the old jail while he was sheriff (1975-82). Or the day he coerced an intern to stuff the end of a toilet paper roll in his back pocket and walk (dragging Charmin all the way) behind a Channel 13 reporter doing an on-camera interview at the Indiana Law Enforcement Academy.

For example, Baugh absolutely hated it, wife Lauralee advised, whenever a parent or babysitter out in public with an unruly child would spot him in uniform and warn the child by saying, "if you don't behave, he's going to put you in jail."

He wanted people to see police officers as someone there to help, which is why he invariably would bend down in front of that child, Lauralee said, "and say, 'I'm not going to take you to jail, but you need to mind your parents.' He hated that almost as much as someone putting two R's in sheriff or two L's in marshal," she added with a slight chuckle.

Baugh also cherished the position of sheriff, which he won for the first time in the 1974 county election, as well as the uniform he wore almost daily for 36 years.

"He was proud of his county," Lauralee assured. "He was thrilled to death when he was elected sheriff."

As sheriff, 67-1 was Baugh's unit number, and he embraced anything associated with that, Jerrod said.

"Whenever I was with him in a gun shop," Jerrod said, "if there was a gun there with 671 in the serial number, it was bought. I don't know how many guns he bought because of that. That's how important his job was to him."

And while wearing the uniform that went with that job, he tried to stay as far away from police officer stereotypes as possible, his son said.

"He wouldn't eat a doughnut in uniform for a hundred-dollar bill. And he liked to say he never took a free cup of coffee in his life," Jerrod added. "Of course, he didn't drink coffee, he drank tea. And while they would give you (police officers) coffee for free, he always paid for the tea."

Meanwhile, so serious was Capt. Baugh about firearms training and safety that he became the driving force (as well as construction manpower) in seeing the pistol range that now bears his name (the Capt. Jim Baugh Firearms Range) created and developed for the Putnam County Sheriff's Department in 1999. Quite literally, it has become the physical embodiment of his legacy.

In a 1996 interview with the Banner Graphic, Capt. Baugh acknowledged that the day he started as a GPD officer in 1967 he wasn't given any special training but was handed a badge and a gun and told to "go down to Big Walnut Creek somewhere and see if it works."

Over his years as a law enforcement officer, Baugh noted the advent of increased police training, particularly concerning firearms, as a tremendous improvement.

Today the county range named for him hosts competitions, offers a training site for not only local officers but state and federal agencies and even a place for retired officers to shoot.

A new law allows retired police officers to carry a firearm, Jerrod explained, as long as they stay certified for the federal program. He says his father would have been thrilled such training is occurring at the pistol range he created.

Capt. Baugh, who had achieved Governor's 20 status as one of the top 20 pistol shooters among police officers in the state, has been honored at the state level another way with the annual Indiana FOP Pistol Match now known as the Capt. Jim Baugh Memorial Match.

That's understandable, of course, considering all the Hoosier police officers who received firearms training from Capt. Baugh during his more than 20 years as an adjunct staff instructor at the Indiana Law Enforcement Academy.

Wife Lauralee was a loving witness to parts of five decades of the alternating seriousness and frivolity that frame the Jim Baugh legacy.

"Work and fun," she repeated. "I think that's how he coped with the deaths and bad accidents, horrible things that happened to kids and things like the suicide we had at the jail. He always felt like he 'coulda, woulda, shoulda,' you know?

"I'm sure he had enemies," she acknowledged, "but I sure don't know who they were."

Lauralee hopes her husband's untimely death, still resonating 10 years later, can serve not only to share and cement his legacy but as a cautionary tale for those contemplating putting off opportunities and activities until their careers are complete.

"Don't ever put off until you're retired something you want to do," she said, "because those days may never come."

Capt. Baugh was within four months of retiring after 32 years with the PCSD, a retirement date that loomed even closer with vacation and sick days he could have used.

Instead, cruel fate intervened the afternoon of Jan. 2, 2004, cutting his life and their dreams far too short.

Yet only days before that tragic event, Capt. Baugh had made his presence felt for another person needing his help, Lauralee recalled.

"Just four days before he died," she said, "he got a call from someone out along (U.S.) 40 near Manhattan that was having trouble with their teenage son. They were told that 'if anyone could get through to him, Jim Baugh could.'"

The deputy dutifully went and talked to the young man, by all accounts setting him straight and making him accountable for his actions.

"He was just really good at helping people," Lauralee offered. "He always said he wished he'd gone to college and gotten a college degree and college knowledge. But I told him, 'You've got knowledge that you can't get from college.'"

That school-of-hard-knocks wisdom served Baugh well. He used to keep a small notebook in his shirt pocket, writing down the names of various teenage drivers who seemed intent on making rolling stops at stopsigns locally.

Whenever he'd stop one, he'd pull out the notebook, and if the offender's name wasn't in the book, he'd give them a warning with the proviso that the next time, he'd be writing him or her a ticket.

"'Life's full of options' he liked to say," son Jerrod recalled, noting how his father once stopped a carload of college students in a speeding vehicle admittedly heading for a night of fun rather than on some kind of an emergency run.

"He asked the driver if he wanted a lecture or a ticket," Jerrod smiled.

The young driver said he was in a hurry and would take the ticket rather than dealing with a presumably lengthy lecture.

So Capt. Baugh went back to his patrol car, called in the license number, ran a check on the vehicle, had the driver's record reviewed and carefully filled out the handwritten traffic ticket.

"That's about an eight- or 10-minute process," Jerrod pointed out.

When Baugh returned to hand the driver the citation, the college student inquired how long the lecture would have been instead.

"About a minute or a minute and a half," the veteran officer responded before cheerfully adding, "Life's full of options."

Treating the people he encountered fairly and properly was another hallmark of his legacy, Lauralee said as son Jerrod nodded his agreement.

"I hear officers at a scene say, 'I'm just doing what Jim Baugh would have done,'" Jerrod related, voice cracking with emotion.

"And that's a real legacy."