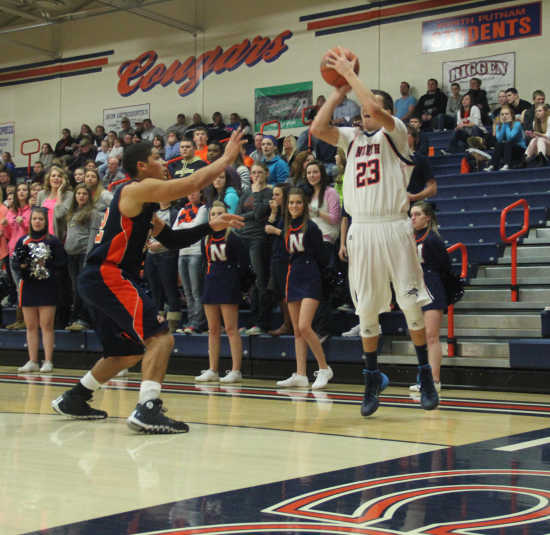 North Putnam senior Jordan Nauert (23) lines up for a 3-point shot from the corner during the second half on Friday. Nauert finished with 31 points, including the first 18 for the Cougars. (Banner Graphic/GRANT WIEMAN)
Order this photo

Nauert finished with 31, including each of North Putnam's 12 first-half points.

"Coach (Lukas Haworth) just said, 'Keep shooting.'" Nauert said. "I had a bad game against Crawfordsville that really bit me in the butt, but I got in the gym the last few days and worked on some things and we started coming together as a team.

"... This is nice getting one from North Mont. They've gotten us the last couple years and it's nice to get one here (at home)."

The Cougars (5-3, 1-0 West Central) were coming off a loss to Crawfordsville on Monday and hoped to avenge it with a win against another Montgomery County team, Nauert said.

Both teams began in a deliberate pace, extending possessions to 40 or more seconds while feeling out the defense, driving and retreating, and remained tied at 6 after the first and 13 at halftime before picking up the tempo to begin the third quarter.

Senior Beau Green started at the post in the second half and played nearly the entire final two quarters, giving the Cougars solid defense and helping to space the floor offensively.

As the game progressed, Nauert's scoring demanded attention from the North Montgomery defense but neither team adjusted. The Chargers were content to guard Nauert one-on-one with senior Chase Mahoy and the Cougars stayed with their base offense.

"We just ran the same old offense like we always run," Nauert said. "Run it 'til it doesn't work anymore, and it worked all night."

Green scored the first non-Nauert points for North Putnam with 2:50 left in the third quarter after Nauert drove to the basket and bounced it to Green for a layup after Green's defender rotated.

A mini-run of baskets by players other than Nauert was matched by the Chargers and the two teams began the final quarter tied at 24.

With 18 entering the fourth, Nauert exploded in the final quarter, burying three consecutive 3s and knocking down four-of-four free throws down the stretch.

Paying ultimate respect, the Chargers trailed late in an obvious foul situation, but waited until Nauert had passed away the ball to send senior Shane Beaman to the line.

Beaman made his final six free throws, going 8-for-11 at the line on the night, and finished with eight points, two assists and one drawn charge.

"You can't do it all by yourself, that's why it's a team game," Nauert said. "When I wasn't open, somebody else was. We're just working together as a team really good right now."

North Putnam was in sync throughout the second half and didn't make its first substitution after halftime until less than two minutes remained in the game.

The Chargers countered by mixing in 12 different players, staying fresh but failing to find a rhythm. Junior Owen Randolph led the Chargers with nine points including a pair of 3s.

Sophomore Baylee Adams had eight points and five rebounds. Junior Grant Gaylor had seven points, shooting 3-for-17 from the field for NMHS.

Nauert led the Cougars with six rebounds and two steals. He was 5-for-11 from 3. Senior Bennett Hazelgrove had six points, four rebounds and two assists. As a team North Putnam was 18-for-21 at the free throw line. The Chargers were just 3-for-8.