State Police reporting worst appears to be over along I-70

PUTNAMVILLE -- After more than 72 hours of intensive activity responding to various winter storm-related service calls, Indiana State Police troopers from the Putnamville Post are beginning to see a reduction in those calls.

For example, from midnight to 4:30 p.m. Wednesday, troopers responded to 23 slide-offs and six property-damage crashes, while also assisting with 16 mechanically disabled vehicles along the roadway. 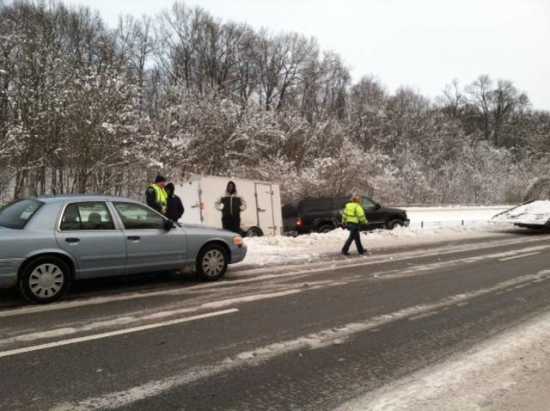 A typical scene along Interstate 70 in the Putnamville District finds an SUV pulling a trailer that slid into the cable barrier on eastbound I-70.

The busiest sections of roadway during the period were Interstate 70 in Putnam County from the 36-mile marker near the Putnamville exit to the 41-mile marker at U.S. 231 in Cloverdale.

Also requiring troopers' attention were I-70 from the 18- to the 24-mile marker in Clay County and in Vigo County in the areas from the one- to three-mile marker and the 11- to 13-mile marker.

Interstate 70 in the Putnamville District was reported as currently open with no problem areas. The roadway ranges from wet to scattered snow and slush spots. Most secondary roads remain snow-covered, slick and hazardous.

While State Police have been concerned with the highways and the interstate and keeping Hoosiers safe there, Indiana Conservation Officers are reminding Indiana residents they are "always on thin ice."

Conservation Officers are advising citizens across west-central Indiana of the potential hazards of being on frozen lakes, ponds, rivers and streams this winter.

Every winter, thousands of Hoosiers enjoy fishing, skating, hiking or just sliding around on frozen ponds and lakes. And every year, people drown after falling through the ice. Like driving on snow, Hoosiers need to re-learn how to have safe fun on ice, officials stress.

Conservation Officers want citizens to put safety first, offering a few tips to remember when considering standing on or walking on a frozen lake or pond:

- Don't test the thickness of the ice while alone.

Conservation Officers say the best rule of thumb when walking on ice, is to believe you are "walking on thin ice." Wearing a life jacket is especially important when on the ice. If you were to fall through, a life jacket will keep your head above the water until help arrives.

With the recent cold snap ice has formed on many lakes and ponds, the community is advised to keep a close eye on children who may be tempted to play on the ice.

Snow can insulate the ice and keep ice from getting thicker, officials warn. Some bodies of water will appear to be frozen solid but actually can have thin ice in several unsuspecting areas.

Flowing water, such as rivers and streams, should be avoided when covered by a layer of ice. Water that is surrounded by sand, many times freezes with inconsistencies.