Catfishing catching on with Cloverdale team 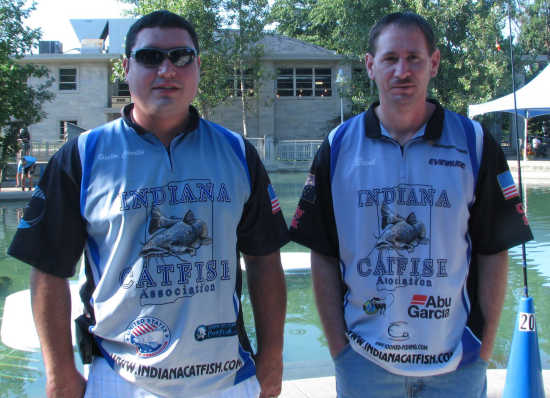 Hector Carrillo (left) and Brent McClellan pose while volunteering at the DNR fishing pond earlier this year while wearing their Thunder Catfishing gear. In its first season Thunder Catfishing finished in the top 10 among 53 competing teams, Carrillo said. (Courtesy photo)

CLOVERDALE -- Catfishing is experiencing a great resurgence. Gone are the days of throwing a worm on a hook and hoping that something bites.

Today's catfisherman is a hunter. He uses a growing combination of high-tech tools and techniques to catch big fish. The sports participation numbers are growing as well.

For Hector Carrillo and Brent McClellan the obsession was immediate.

"I've always loved catfishing, so when the opportunity came up to fish competitively I jumped on it," says Carrillo, a 32-year-old quality engineer. "You think that you know everything there is about fishing until you start doing it competitively. Then you realize how much you don't know, and how much work it is. But I love it."

"I've been tournament fishing since 2008," said McClellan, a 38-year-old quality technician. "This is our first year fishing together competitively and it has been a blast.

"We have fished a lot of new places this year and finished well several times. We have also done a lot to get involved and help the community." 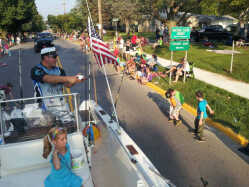 Hector Carrillo casts out a piece of candy during the Putnam County 4-H Fair parade. He was sure to use a clothes pin to keep the kids safe, but they enjoyed the unique candy acquisition. (Courtesy photo)

Earlier this year their fishing boat float was a link in the Putnam County 4-H Fair parade as they tossed candy to the children enjoying the festivities.

The pair also volunteered at the Indiana State Fair in the Department of Natural Resources kids' fishing pond which reached more than 3,000 children.

"I love helping kids, because they are our future," Carrillo said. "When you see the glow on a child's face who has just caught their first fish, well, there's nothing like it.

"We also teach them about environmental responsibility and how to take care of our natural resources. Things as simple as turning off an extra light or the faucet at home can make a big impact on the environment, and on mom and dad's wallet."

In February they will be speaking at the boat sport and travel show as one of the presenters for the Indiana Catfish Association.

"There are several of us from the club who will be speaking and I can't say enough good things about the ICA," Carrillo said. "It's a great group of men and women who are always more than willing to help out however they can."

Founded in 1999, the Indiana Catfish Association is the premier catfishing club in Indiana and the members of team Thunder Catfishing recommend visiting the group's website, Indianacatfish.com, for all the details and to help increase the number of participants at future tournaments. 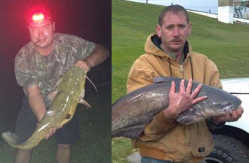 So what does this season hold? A lot, according to Carrillo.

"I'm extremely excited about this year. We will be launching a web series on YouTube about some of our fishing tips and tricks, adventures, and mishaps that we are very excited about," he said. "We are looking forward to sharing this with our fans in the online fishing community.

"We will also be using this opportunity to promote our great local business partners and their goods and services to our online viewership. We are looking forward to promoting our friends at Buck and Dumb Bass Outdoors in Cloverdale and Brinson Chiropractic in Linton as well as a few new companies this year.

"We are also launching a Kickstarter campaign to help fund the show, so if there are any local businesses in Putnam County that would like to help out we would be glad to have them on board and help them advertise their goods and services.

"Our great social media platform allows us to share our fishing experiences with thousands of people worldwide and promote the sport of catfishing, which we love to do. We would love to see more people discover the joys of catfishing and are working hard to make that happen."