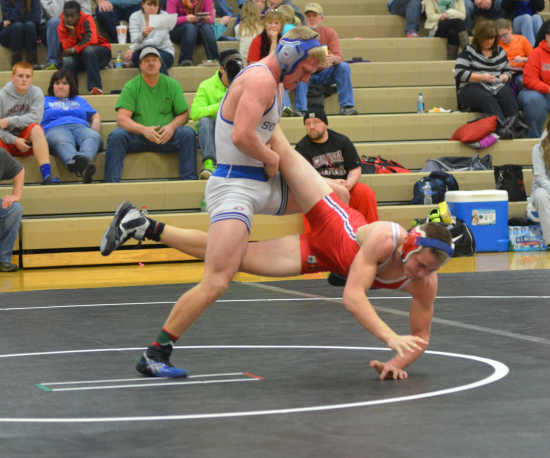 MONROVIA -- After their efforts at the Indiana High School Wrestling Coaches Association State Duals last weekend, South Putnam's wrestling squad could have been frustrated after weather eliminated an entire week of practice.

Instead, the Eagles showed off more of their season's work in winning four out of four matches at the Monrovia Duals Invitational Saturday.

South Putnam head coach Josh Hendrickson said the squad handled the meet well despite the down time over the past week. 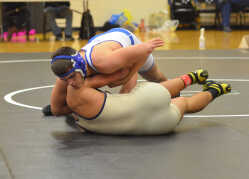 Chris Migliano rolls up an opponent during the tournament on Saturday. (Banner Graphic/TRENT SCOTT)

"We wrestled well today," Hendrickson said. "Everybody was in the same situation without being able to practice. Our experience helped us a lot with as many seniors as we have on the team.

"Each team provided us with a different challenge but the biggest thing was that we got matches today."

The Eagles opened the day with a 46-27 win over Owen Valley, followed by knocking off host and West Central Conference rival Monrovia 42-32. A win over Tri-West 48-24 set up a clash with fellow unbeaten squad Indianapolis Cardinal Ritter in the final round, one which South Putnam won 35-27.

Making the efforts that much more impressive was that the Eagles won each round without state-qualifier and No. 9 ranked 195-pounder Rudy Harris. Harris, sidelined with a leg injury, watched as his replacements in the 195-pound weight class went 3-1 on the day.

South Putnam picked up a victory over the Patriots in the first round with wins from Kieffer Vittetow, Nick Owen, Jacob Lorimer, Joe Waters, Cody Wyatt, Kyle Shaffer, Jacob Williams and Lane Hacker.

In the following round, the Eagles rallied from a 32-18 deficit with four consecutive pins by Shaffer, Will Cruse, Williams and Hacker to slide past the host Bulldogs and pick up their second victory of the morning.

South Putnam put in its best score of the day against Tri-West in the third round of the day with wins from Vittetow, Owen, Lorimer, Levi Whitaker, Waters, Chris Migliano, Cruse, Shafer, Williams and Hacker.

Hendrickson noted that the results were made by the efforts of many of the younger wrestlers on the squad.

"Freshman Levi Whitaker really stepped up for us today and did well to get three wins," Hendrickson said. "We had guys shuffling weight classes today and got varsity matches in.

"Will Cruse picked up a couple of wins that helped cap off two of the rounds. Kyle Shaffer bumped up to 195, wrestled some quality competition and did well all day for us."

After a break for the fourth round, the Eagles faced a Ritter squad that also came in unbeaten on the day while giving up four weight classes in each round.

Wins from Owen, Lorimer, Whitaker, Waters, Migliano, Shaffer and Hacker carried South Putnam in the final frame to a win that capped off an unbeaten 4-0 record on the day.

The round featured the day's marquee matchup when Williams, ranked No. 15 at 220 pounds, fell to No. 4 Dylan Faulkenberg by pin in the third period.

As well as the meet went for the Eagles, Hendrickson said that having school on Monday meant that the squad had a chance to get back into a regular schedule again.

"It'll be good to get back to practicing and getting better," Hendrickson said. "We can get back to doing drills and work on some of the things we were not doing so well today.

"Getting back to practice will also help with our conditioning. It's now a race to see who can get in the best condition over the next three weeks before sectional. "

With sectionals looming three weeks away, Hendrickson said that the squad needed as much mat time as they could get, starting with Plainfield next week.

"We've got a big meet next weekend in the WCC meet but we also have a big match against Plainfield before that," Hendrickson said. "Plainfield will bring a full team so everyone will get a quality match.

"We're always looking for that mat time and teaching experience for these guys. We want to get them in the best shape we can for the conference meet and then begin to prepare for sectionals."