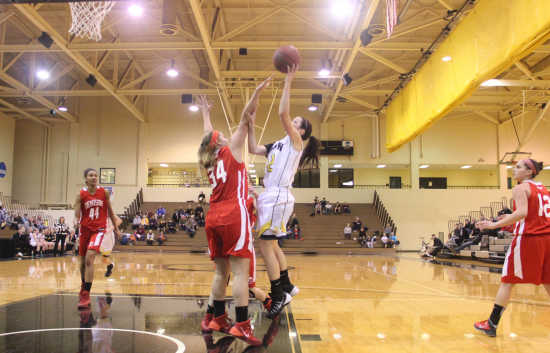 DePauw junior Hannah Douglas drives in for a layup attempt during a game earlier this season. Douglas had a DPU career-best 16 points on Saturday. (Banner Graphic/GRANT WIEMAN)

GAMBIER, Ohio -- The DePauw women's basketball team started about as well as a team could and never looked back on the way to a 100-59 North Coast Athletic Conference win at Kenyon on Saturday. The top-ranked Tigers improved to 14-0 overall and 5-0 in the NCAC, while the Ladies dropped to 8-5 overall and 3-2 in conference play.

DePauw missed its first field goal try of the game, but knocked down its next eight in jumping out to a 16-2 lead in the opening 4:06 of the contest.

The Tigers led by as many as 24 on the way to a 51-29 halftime lead and hit 70 percent from the floor in the process.

The second half was much of the same as Kenyon closed the gap to 18 in the opening three minutes, but DePauw gradually stretched it out to as many as 43.

Six Tigers scored in double figures led by Hannah Douglas with a DePauw career-high 16. That was just four shy of matching her collegiate high of 20 when she played for Butler. Savannah Trees added 15 followed by Alex Gasaway with 12 and Emma Ondik with 11.

Ali Ross and Alison Stephens each scored 10 and Stephens hauled down 10 boards for her third double-double of the season. Douglas matched her DePauw career best with five assists and shared the team lead with Ross.

Maggie Boelter paced Kenyon with 21 points with Maureen Hirt and Avery Anderson each grabbing four rebounds. Hirt, the leading scorer in the NCAC with 21.2 points per outing was held to her collegiate low of just two points in 26 minutes and attempted only five field goals. Meredith Williams dished out a team-best five assists.

DePauw connected on 66.7 percent from the floor which was the second-best effort in school history behind the record 69.2 percent against Rose-Hulman on Feb. 17, 2000. The Tigers also limited the Ladies to just 38.5 percent from the floor after Kenyon came into the game ranked 10th in Division III field goal percentage. The 100 points marked the first time since Dec. 2, 2006, that DePauw reached the century mark in a game.

The Tigers held a commanding 38-18 edge on the boards and hit 8-of-17 three-point field goals.

DePauw extended its overall win streak to 48 which ranks fourth in NCAA Division III history and its regular season string to 67. The Tigers have also now won 27 straight games on an opponent's home floor and 45 consecutive conference contests.