Tigers make it five straight with win at Kenyon 62-54 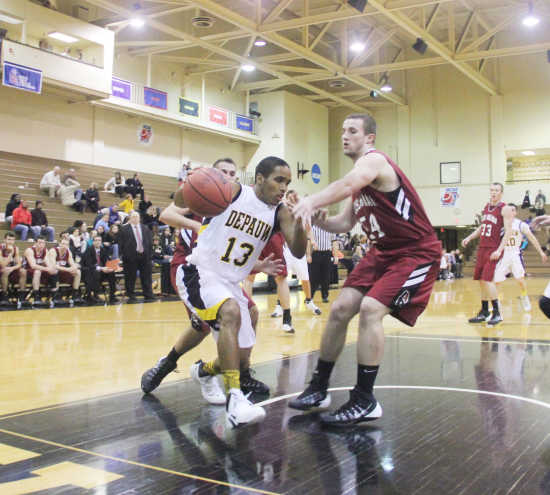 GAMBIER, Ohio -- The DePauw men's basketball team extended its win streak to five and won for the third straight time on the road after taking a 62-54 North Coast Athletic Conference win at Kenyon.

The Tigers improved to 10-3 overall and 5-1 in the NCAC, while the Lords dropped to 6-7 overall and 3-3 in the conference. The five-game win streak is DePauw's longest since it won six consecutive during the 2010-11 season.

The teams battled through a tight first half that included five ties and five lead changes. Kenyon built as much as a five-point lead on a couple of occasions, but DePauw held Kenyon scoreless over the final 4:45 of the opening half and scored six straight to turn a two-point deficit into a 30-26 halftime lead.

The Lords scored the first five points of the second half before Adam Botts hit a 3-pointer and Tommy Fernitz a layup to put DePauw back in the lead, 35-30.

Later in the half, DePauw scored 10 straight to expand its lead to 49-34 with 8:29 left. The Lords scored the next seven to trim it to eight and eventually closed the gap to four after Julian Pavlin's three-point play with 2:43 remaining.

DePauw responded on the next possession as Adam Botts knocked in a three and the hosts got no closer than six the rest of the way.

Tommy Fernitz recorded his fifth straight double-double with 14 points and a career-high 17 rebounds for the longest such streak by a DePauw player since Joe Ringger accomplished it early in the 2002-03 season. Over those five games, Fernitz is averaging 17.4 points and 15.6 rebounds. Adam Botts followed with 13 points and Pat Haggin added three assists.

DePauw shot just 38.5 percent from the field to Kenyon's 37.9 percent, but the Tigers outscored Kenyon from the line, 17-7.

The Tigers return to the Neal Fieldhouse for a 6 p.m. contest against Wittenberg on Wednesday, Jan. 15.