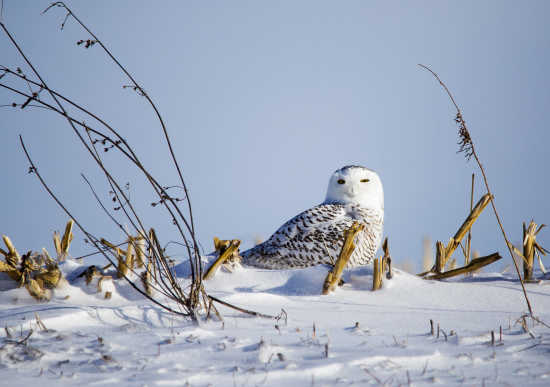 Courtesy photo/BECKI ARNOLD
This recent rare sight in Kenny Ames' cornfield northwest of Fillmore is a visiting Snowy Owl, photographed by Becki Arnold, who lives nearby.

FILLMORE -- The familiar old saying "every cloud has a silver lining" is most often credited to poet John Milton way back in 1634.

But little could Milton -- wise old owl that he was himself -- ever guess that his spot-on turn of phrase would be so fitting for the aftermath of a west-central Indiana snowstorm four centuries later.

For while the recent wintry blast brought Putnam County both a foot of snow and below-zero temperatures that hadn't been seen in these parts for 20 years, it also brought the rare sight of a Snowy Owl just outside Fillmore.

The Snowy Owl, the official bird of the Canadian province of Quebec, is a widely sought-after specimen for bird watchers. And when local photographer Becki Arnold heard reports of her neighbors spotting one near her farm just northwest of Fillmore, she went on the prowl for the rare owl.

"I had heard that there was a Snowy Owl near our home," Arnold told the Banner Graphic. "Some were saying (it was an) Arctic White Owl but I researched it, and I believe it is the Snowy Owl.

"Being a photographer, I decided to put my 500 (millimeter) lens in the car as I headed out with my husband," she added.

The Arnolds didn't get very far down the snow-covered county road when she spotted a young man across the street from their farm on Kenny Ames' nearby property.

"I got so excited," she said, "I was whipping out the lens and connecting it to one of the cameras and I told my husband he had to stop. He hadn't actually even stopped when I opened the door and made a mad dash out to get a glimpse of this magnificent bird."

Creeping up on birds to take photographs of them is certainly nothing new to Arnold, who said she spent most of her spare time this spring and summer watching the eagles and eaglets at Clinton Falls and taking oodles of photos as the babies grew up.

But the visiting Snowy Owl commanded at least equal attention, having chosen Arnold's own neighborhood to frequent after all.

"After walking all the way through the bean field, right on the edge of the first corn rows, I saw it," Arnold gushed. "It was more beautiful than I could have dreamed."

The Snowy Owl is said to be one of the largest species of owl in North America. While adult males are all white, females have the dark scalloping that can be seen in Arnold's pictures (one of which accompanies this article).

"I slowly crept up to it," she continued. "I was able to grab a few great photos of it before it became tired of me and flew a little farther into the cornfield.

"I was so excited," she said, "I didn't even mind that I face planted in the snow on the way back to the car."

The Internet encyclopedia Wikipedia notes that the Snowy Owl is well adapted for life north of the Arctic Circle and is typically found in the northern circumpolar region.

Snowy Owls winter south through Canada and northern Eurasia, although they have been reported as far south as the Texas, Georgia, southernmost Russia and northern China.

In January 2009, a Snowy Owl appeared in Spring Hill, Tenn., the first reported sighting in that state since 1987. Also notable is a southern migration in the winter of 2011-12 when thousands of Snowy Owls were spotted across the United States. That was followed by an even larger 2013 southern migration with the first Snowy Owls seen in Florida in decades.

Meanwhile, Arnold and others are just happy to have spotted one on an otherwise dreary winter day in Putnam County.

"I know I will be looking for it again," she said, "but it probably knows I am looking, so it will just try to hide itself in all this snow."