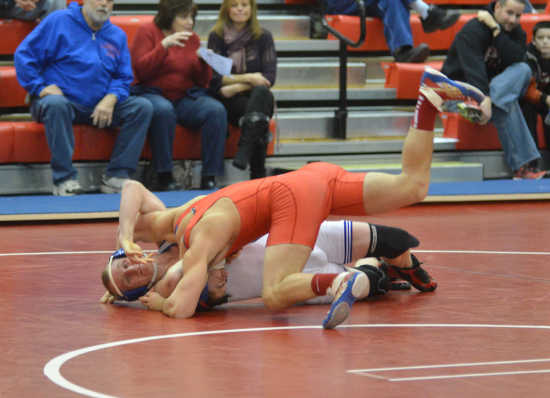 South Putnam's Dakota Bunten (left) wraps up his opponent before pinning him during Tuesday's match at Plainfield. (Banner Graphic/TRENT SCOTT)

PLAINFIELD -- Having to change plans on short notice, South Putnam's wrestling squad made the trek to Plainfield Tuesday night where it lost 45-34 to the host Quakers.

South Putnam head coach Josh Hendrickson said the round was a solid test for the squad ahead of the West Central Conference meet Saturday.

"Plainfield's a good team," Hendrickson said. "We will see them in the regional so that's a group we have to prepare for.

"Tonight was a good measuring stick for us. We had been wrestling smaller schools lately and got to see where we're at tonight wrestling quality opponents. It's great preparation for Saturday."

While the dual meet had to be shuffled around at the last minute, Hendrickson said the early week meet left the squad time to get additional practice time in before traveling to Cloverdale for the WCC meet.

"We'll do a lot of hard drilling and live wrestling this week," Hendrickson said. "We have a good wrestling room and it's good for the boys to get back in and practice again.

"We'll give up a couple of forfeits at the WCC meet, which hurts us, but our expectations are to go in, do our best and wrestle to win. That's what we're aiming for every week."

Next Match: South Putnam travels to Cloverdale for the WCC meet Saturday.