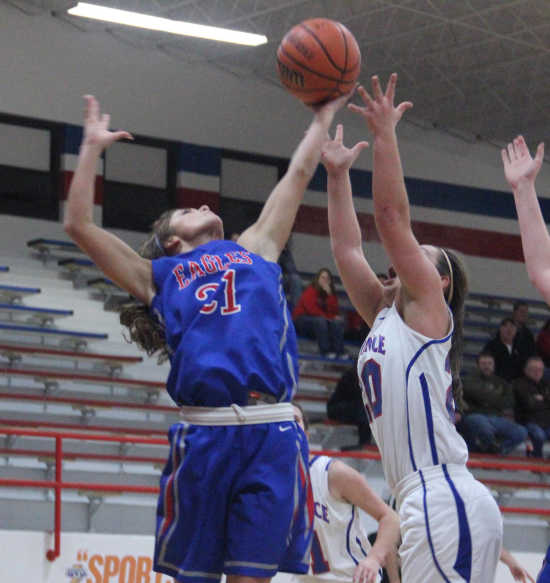 South Putnam junior Ariel Higgins jumps to pull in a rebound over her opponent during Monday's win at Eminence. (Banner Graphic/GRANT WIEMAN)

The Panthers did not look back but the Eagles never let it get out of hand. SPHS coach Bill Merkel believes fatigue played a big role in the case of his team not being able to win.

"For three quarters we played well, except we got tired and started making some mental mistakes," Merkel said, "We had a hard time to them mixing it up a little. Overall I thought we played well."

Free throws also hurt the Eagles, who were outshot 21-8 at the line.

Both teams have had a long break and it showed. They came out wanting to get a big win to start the new year.

Turnovers and bad shots surrounded both teams. The high shot totals were tallied because of the offensive boards. Each team went into double digits in the category.

"I thought the key to the game would be rebounding and we did a decent job till we got tired, then they beat us," Merkel said.

Panthers senior Shelby Benell led all players with seven offensive boards and having 15 total rebounds. She finished with a double-double, tallying 12 points.

RPHS put pressure on Eagles' senior Aubrey Nichols. Whenever she was in the open floor she constantly drew a double-team. She made a few good plays but she also threw the ball away on occasions. Overall she had a fairly successful night as well as her whole team.

"I thought we let them have to many easy transition baskets. Turnovers are what hurt us," Merkel said.

As the game went on, every time South Putnam or Riverton Parke did something big its opponent always repeated it. The Panthers outscored the Eagles in all quarters but it was constant and the Eagles never let it get away.

The Eagles' stellar and persistent play could have been because of sophomore Jessica Modglin. She came off the bench and brought the energy needed to sustain her team's focus. Her stats may have not been great, with two points in the game, but her presence was felt. This is something the Eagles have needed all season.

In their next game they will host Greencastle Friday at 6 p.m. in a girls-boys double-header.