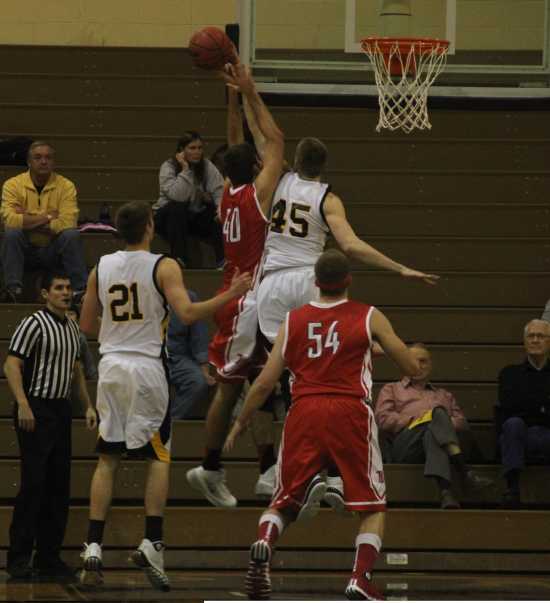 Constant pleas for energy from the coaching staff of the DePauw men's basketball team were answered on Wednesday as the Tigers blew past No. 9 Wittenberg 72-46.

DePauw used a deep rotation to keep the pace on its terms and dominated on both ends in the win. Junior Tommy Fernitz just missed his sixth-straight double-double with 11 points and eight rebounds and senior Michael Wilkison led the hosts with 23 points.

"I've never done this before where I've been this liberal (with the playing rotation)," DePauw coach Bill Fenlon said. "You want to have a way that you play, and you want to be able to plug guys in to that way. ... We change the combinations in practice so guys are playing in different combinations all the time."

The starting lineup for DePauw played less the eight minutes together during the course of the game and never beyond the first four minutes of either half.

The lack of continuity on DPU's lineup had no ill effects as whatever group was on the court found synchronicity on both offense and defense.

"We're playing a lot of guys and we're taking each game and trying to play the guys that are playing the best, the most," Fenlon said. "It's a lot of even playing time, and that was an opportunity to keep the energy up."

Mixing in different players -- 10 played at least 13 minutes for DePauw -- was part of the coaches' plan to keep the team fresh and keep the energy up.

They used it to force turnovers, make active plays in the post and on defense and create movement on offense.

"I felt like the key to the game was whether we could guard them and outrebound them," Fenlon said. "You've got to have juice for that."

DePauw's offense in the first half was mostly on the outside with the team attempting 12 3-pointers, but as Wittenberg tired the hosts worked the ball into the paint more after the break.

DPU had 22 of its 33 points in come near the basket in the second half and made 11-of-14 shots on those attempts. Wittenberg struggled near the basket as Fernitz, senior Pat Haggin, sophomore Mark Johnson and junior Bob Dillon flashed on every drive and affected layups.

"The key was being able to squeeze it out of (the low post) without giving it up on the perimeter," Fenlon said. "I just thought we had great overall awareness of what the next job was the whole night. When you take one thing away, you're creating a difficulty somewhere else and you have to be able to be in position to handle that.

"We have a thing we've been telling them. 'Just because you're not directly involved, you can't be waiting for a bus.' You can't be standing straight up, not engaged and not paying attention. ... When you get guys thinking about the game like that, then you can really start to build."

DePauw's flexibility in its post defense forced Wittenberg to change its attack offensively. Instead of relying on senior center Scott Masin, who entered the game with 17.2 points, Wittenberg had to drive, and drive to spots DPU wanted them.

Masin finished with a team-best 10 points.

The eight-point advantage at halftime ballooned quickly in the second half to 11, then 18, then 26.

With the defense locked in, DePauw's offense caught fire as well, shooting 56 percent in the second half and holding Wittenberg to just 23.3 percent.

DePauw also limited second-chance points, taking a 37-21 advantage on the boards in the game against a Wittenberg that had been outrebounding opponents by 12 per game coming in.

DPU's next game is home Saturday against Ohio Wesleyan at 1 p.m.