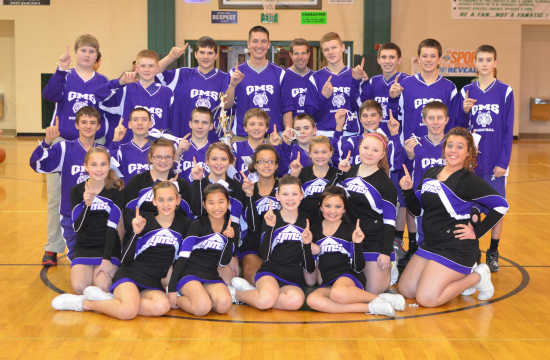 CLOVERDALE -- Greencastle Middle School kept its place atop the boys' basketball heap after both the seventh and eighth grade squads won the Putnam County Tournament Wednesday. 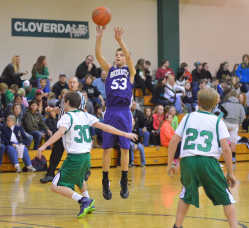 The seventh grade squad used lengthy and a stingy defense to overpower Cloverdale 38-12 while the eighth grade team knocked down all 12 free throws attempted in the fourth quarter to outlast North Putnam 55-43.

After a slow start in the opener, Greencastle seventh grade head coach Nate O'Hair said the squad needed time to get going but stayed patient and were rewarded for their efforts.

"I was proud of the boys," O'Hair said. "We had a tough first round against South Putnam. I told them we could come out strong like the first game or come out flat.

"We felt like we came out flat and so did the boys but we executed very well in the second half. I was pleased with how hard they played."

The Tiger Cubs overcame a slow 6-4 first quarter start by holding the Clovers to a pair of free throws in the second quarter while scoring 12 to take a 17-6 halftime lead. 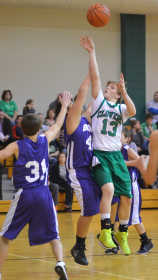 A combination of full court pressure and length continued to make life difficult for Cloverdale as the hosts could only manage six more points in the second half.

Eventually the Greencastle offense picked up steam and scored 21 points in the second half to seal the first title of the night, including a 13-0 run that covered the end of the third quarter and the start of the fourth quarter.

O'Hair said that the starting five's consistency all season paid off in the title game.

"Our starting five has been the same all season outside of a couple of injures," O'Hair said. "They play very well together. These guys never give up.

"We've had ups and downs this year but their attitudes have gotten better all year. I told them that I wanted them to get better at one thing every day.

"They've done that each and every day at practice at games," O'Hair added. "I'm extremely proud how hard these guys have worked." 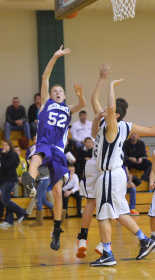 In the second game of the night, a slow third quarter for North Putnam coupled with a 12-for-12 effort from the free throw line helped propel the Tiger Cub eighth-graders to a 12-point victory.

Greencastle eighth grade head coach Jimmy Beasley said that the squad got a win over a much-improved North Putnam squad.

"It's always good to get a win," Beasley said. "It's good to do that against a county team as good as North Putnam is. They've gotten better and better and you can't say enough about how well they played tonight.

The game was delayed in the early minutes due to an injury to Greencastle's Ben Gellman that prevented him from returning to the game.

Both sides traded baskets in the first and second quarters, with the Tiger Cubs leading by four after the first quarter and by six after a Preston Headley three-point shot.

North Putnam ended the half on a 10-4 run, briefly taking the lead on a pair of Isaac MacGregor free throws before a late basket tied the game at 26-26 heading into halftime.

Scoring came at a premium in the third quarter as the Cougars got a solitary basket from Treyton Smith. Greencastle only managed nine points but created breathing space with defense Beasley was more accustomed to seeing from his squad.

"We were really pleased with our defense," Beasley said. "That's where we go to every game. We had a big turnaround from last year because we worked on our defense and that carried us.

"The third quarter was a little bit close to the way we've played defense all year and you couldn't ask for a better quarter than that. The rest of the game was a fast-paced game that we had to keep up with them in." 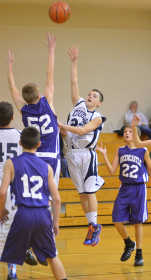 The offenses came back out in force in the fourth quarter but the contest came down to free throws as the clock ticked away.

Tiger Cub guard Colin York hit all 10 free throws he took to cap off a game-high 23-point outing, one that Beasley said helped salt the game away.

"Colin is our leader and the kids look to him for a spark," Beasley said. "We couldn't ask for a better person at the line down the stretch."

The Tiger Cubs have three more games left on the schedule and Beasley said that the additional time would help to reinforce much of the work that had been done up to this point.

"Both grades have a lot of fundamentally sound players," Beasley said. "We've worked with them on fundamentals and working within their skill set. These guys make a lot of good decisions and that's why we had success here tonight." 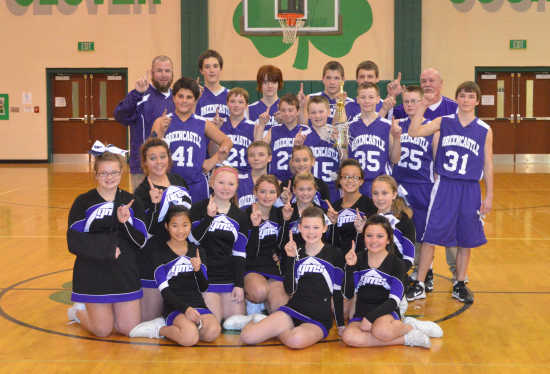