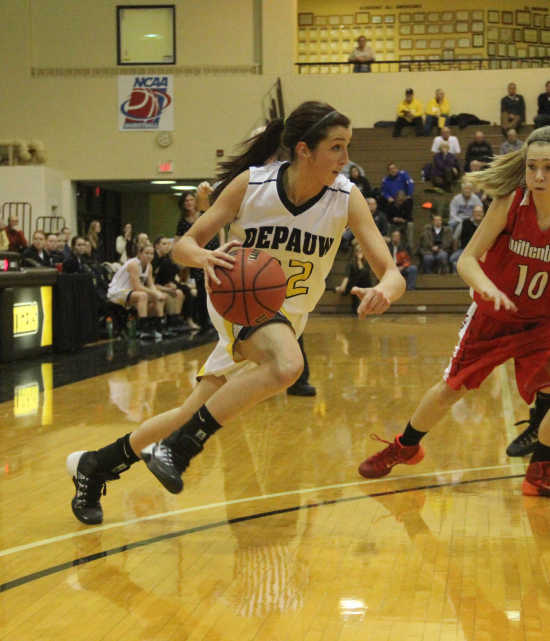 DePauw junior Hannah Douglas drives toward the basket with her off-hand during Wednesday's game against Wittenberg. Douglas is in her first season at DPU after transfering from Butler. (Banner Graphic/GRANT WIEMAN)

With 33 points in her last two games, DePauw junior Hannah Douglas is emerging as an important cog for the No. 1-ranked team in the country. This would have seemed far-fetched three months ago, when Douglas's right arm was wrapped in a sling.

It would have been unimaginable eight months ago, when she was finalizing plans to transfer to Florida Gulf Coast. And it would have been impossible a year ago, when the 5-9 guard was averaging 8.6 points and 4.4 rebounds in her sophomore season at Butler.

Douglas took a circuitous route on her way to joining the defending national champions and a team that has now won 47 consecutive games, but she has found a home and her teammates, coaches and peers have embraced her.

"She's a great teammate," senior Ali Ross said. "She has fit in so well on the team and has been an amazing asset. I'm really glad she came."

While Douglas is the first Division I transfer the DePauw women's team has had in the past decade, hearing her tell the story makes it seem remarkable more student-athletes don't stick with the choices they're forced to make as 15-year-olds.

Douglas was attending Pendleton Heights High School, starring on the basketball court and on the summer AAU circuit when colleges started trying to entice her toward their school.

"It was really stressful as a sophomore in high school trying to figure out where you were going to go and where you wanted to spend the next four years," Douglas said. "I wanted to stay close to home and Butler was a great school and that was when the boys were doing really well and it was a great atmosphere.

"... I'm still happy that I made that decision because of the proximity and the people I met there. I'm happy with it."

Joining a school that had its men's team play in back-to-back Final Fours was an incentive, but not as much as staying close to home where her family and friends could watch her play, Douglas said.

She committed to Butler and made fast friends with her teammates. Even now, she has nothing negative to say about her experience as a Bulldog, but something just didn't feel right.

Douglas grew up playing in a fast-paced, motion offense and the Bulldogs relied on sets. Mostly, though, she was struggling to find as much joy as she always had playing the sport she loved.

Her shoulder injury didn't help. Midway through last season Douglas's right shoulder was hurt during a game, and while she was able to play through it (she's left-handed), the offseason meant rehab and, she decided, a fresh start.

A teammate her freshman season at Butler had transferred to Florida Gulf Coast the year before and Douglas made plans to join her for her junior year. (Watching the men's team dunk all over its opponents in the NCAA tournament was enjoyable, but not a deciding factor, she said.)

Douglas talked to her coaches at Butler, then filled out paperwork with the admissions office to open her recruitment.

After completing her transfer process to move to FGCU, Douglas said something again didn't quite feel right.

Her experience at Butler had her wanting to get away from everything and start fresh far away, but as she got into the summer and further from the conclusion of the season, she realized she still wanted to be close to home. 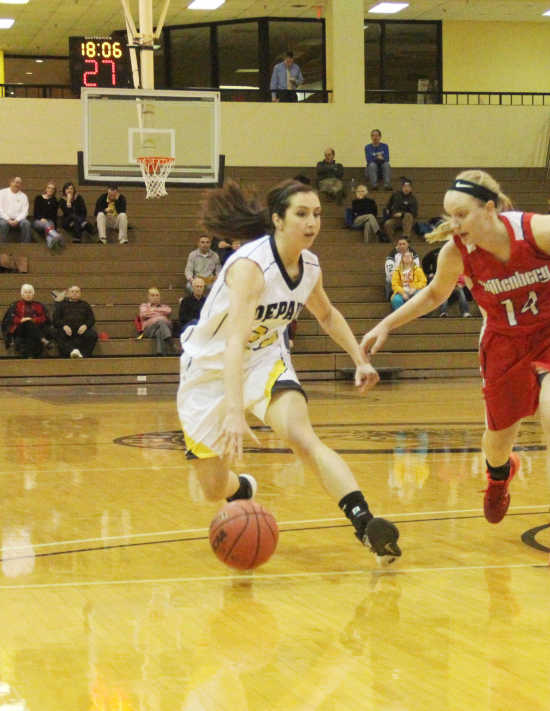 Her assistant coach at Butler, Amy Cherubini, told her about DePauw.

"I had heard about DePauw and I knew that they had won previously, but I didn't know they went undefeated last year or anything like that," Douglas said.

Douglas and Cherubini were both working at an AAU tournament last summer as Cherubini started to tell her about DePauw, its Hall of Fame head coach Kris Huffman and the team's recent success.

"Coach Cherubini asked, 'Have you ever thought about going DIII and going to DePauw? They've got a really great program, great coaches, great girls,'" Douglas said. "I had heard about it but I didn't really know a lot about it. ... A guy from high school went there. That's really all I knew about it. I didn't know about the basketball program until coach Cherubini told me."

Word got to Huffman, who was also working the tournament, and Douglas sent the request to FGCU to transfer again.

"Our assistant compliance director contacted Florida Gulf Coast to make sure we could get a release and we did all the paper work before we talked to her," Huffman said.

They spoke and Douglas, rehabbing her shoulder with her arm in "a huge sling running across my whole body," decided to come to DePauw for a visit.

"When I came here for the first time and I met coach Huffman and I met coach (Mary) Smith and I met some of the girls, I loved it," Douglas said. "All the girls on my team are so nice and they welcomed me. ... As an athlete, you always want a coach that cares about you and I could tell that was the kind of person (Huffman) is."

Douglas made up her mind to transfer to DePauw and word got out to the Tigers that they'd be adding another weapon to their already potent lineup.

"She came from Butler so everybody was like, 'Oh, she's got to be really good,'" Ross said. "It was really exciting. Talking to other players, we were thinking she's going to make our team better and she has."

Douglas fit with the team, both from a personality and basketball standpoint, immediately. She's friends with everyone, she said, and recently became roommates with senior forward Alison Stephens.

While Douglas could have come in with preconceived opinions, or an attitude about being a DI player joining a DIII team, Ross and Stephens said that wasn't the case at all. She was just as eager to learn and fit in as any other first-year player at DPU.

"She's really easy to get along with and she takes what you say (about basketball) very seriously," Stephens said. "It's a little different because she's only a year younger than me so when it came to preseason I didn't want her to think I was treating her like (she had no college experience)."

As the preseason began, Douglas was still recovering from her shoulder injury and was unable to do anything physically. She worked to be part of the team, but only started non-contact drills in early November and had her first full-contact practice on Nov. 14.

"I love basketball, so not being able to play for six months was killing me," Douglas said.

Getting thrown onto a new team, with a new system, and trying to pick all up just days before the first game was an impossible task, but one she embraced.

"She did a great job of staying involved and trying to get to know the team and not overstep her bounds," Huffman said.

In her first few games, Douglas was searching for her place in the offense. She played tentative, partly because of her shoulder but also because she was having to think about the offense instead of just being able to relax and play.

"Not playing for six months, as much as you want to think that you'll come back and everything will be great, it wasn't that easy," Douglas said. "Shots weren't falling that usually were falling and stuff like that. ... I'm definitely feeling a lot more comfortable and more in-tune with the system and how the games go."

Through the first ten games, Douglas was averaging 5.7 points and 2.0 rebounds and shooting just 27.4 percent.

She scored eight points at Spalding on Dec. 14 and appeared to be figuring things out, but then she got sick and missed a week of practice.

Now, fully healthy, she appears to have everything figured out. She's playing with confidence and fitting in her role instead of just trying to fit in. She had 16 points in the Tigers 100-59 at Hiram last week and topped her career-high with 17 against Wittenberg on Wednesday.

In those two games, Douglas is 11-for-15 from the field and 7-for-8 from the free throw line. She's also been asked to start carrying a larger load defensively.

"She's a tremendous offensive player, but we've asked her go shut down the other team's best scorer, so she's also a tremendous defender," Huffman said.

Douglas says the talent-level isn't all that different at DePauw than it was at Butler.

"Competition-wise, everything is the same," she said. "It's tough. Every game you have to go out and play your best. You're just worried about getting better."

She also said her individual goals are the same as they've always been. There's no extrapolating or projecting that if she could do this at one level she could do that at another. She just wants to do whatever it takes to win.

Playing at DePauw, the unanimous No. 1 team in the country and the defending national champion, gives her the chance to do that, no matter who she plays.

And though she wasn't part of the title run last year, she is excited about the opportunity playing for the Tigers gives her to repeat.

"That's always a dream. If you want to play college basketball, you want to win the national championship," Douglas said. "That's what everyone is working for."

Douglas didn't come to DePauw with any expectations about how the team should practice or play, or carry an heir of superiority, she came to win.

Like her coaches and teammates preach, they do that game-by-game.

"I want to win, so whatever we have to do to accomplish that, that's what I want to do," she said. "We don't talk about (repeating), we just kind of go, 'Next game is this, the next game is this,' and we just work our way through. We're just trying to get better so that when the conference tournament comes we can hopefully succeed and see where we go from there."