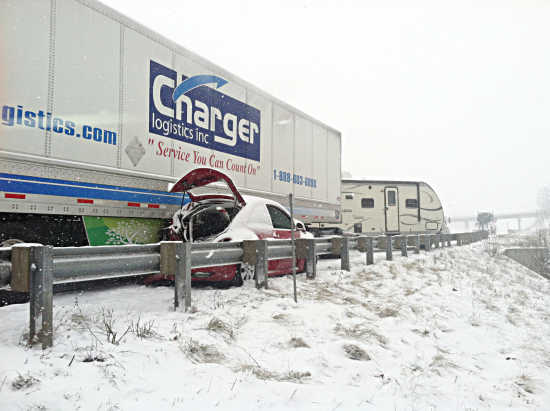 The driver of this Volkswagen Beetle, David McDonald of Indianapolis, was critically injured when the car was pinned against the guardrail by an 18-wheeler. The crash resulted in Interstate 70 westbound being closed for two hours and traffic diverted to U.S. 40. (Courtesy of Indiana State Police)

The two people injured Thursday morning in the six-vehicle crash on Interstate 70 near the 30.5-mile marker have been identified.

Indiana State Police troopers responded to the crash at 9:20 a.m. Westbound traffic had slowed and stopped for multiple slide-offs and a crash when a westbound tractor-trailer driven by 28-year-old Rajwinder S. Brar of Ontario, Canada failed to stop and struck the stopped the traffic in the rear.

McDonald was driving a 2009 Volkswagon that was forced into the guardrail, causing his injuries.

During the initial impact with the traffic, one or more of the vehicles struck Akendengue, who was standing on the road outside his stopped 2000 Toyota Camry.

The trucking company was Charger Logistics of Mississauga, Ontario and hauling zinc oxide. No citations were issued.

The crash was worked by ISP Sgt. Chuck Tharp. The commercial vehicle and driver inspections were conducted by ISP Master Trooper Matt Ames.