Noted mime to be featured at event supporting Ivy Tech

Surprise! Organizers of an upcoming fundraiser to support Ivy Tech Community College scholarships couldn't resist revealing the identity of an entertainer heretofore announced only as a "surprise guest."

When the Bags & Bubbles event and its companion Super Bowl Kickoff party unfold on Friday, Jan. 31, the guest performer will be Mark Abbati, a renowned silent interactive performer who caught the eye of Dave and Sue Murray at an Indianapolis 500 Mayors' Breakfast a few years ago.

So impressed was Dave Murray in Abbati's performance that he tucked away the performer's contact information for future reference.

"He is just awesome," Murray said of a performer whose act brings to life some 75 different characters with motionless poses and convincing costumes. "I've hung onto his business card for four or five years." 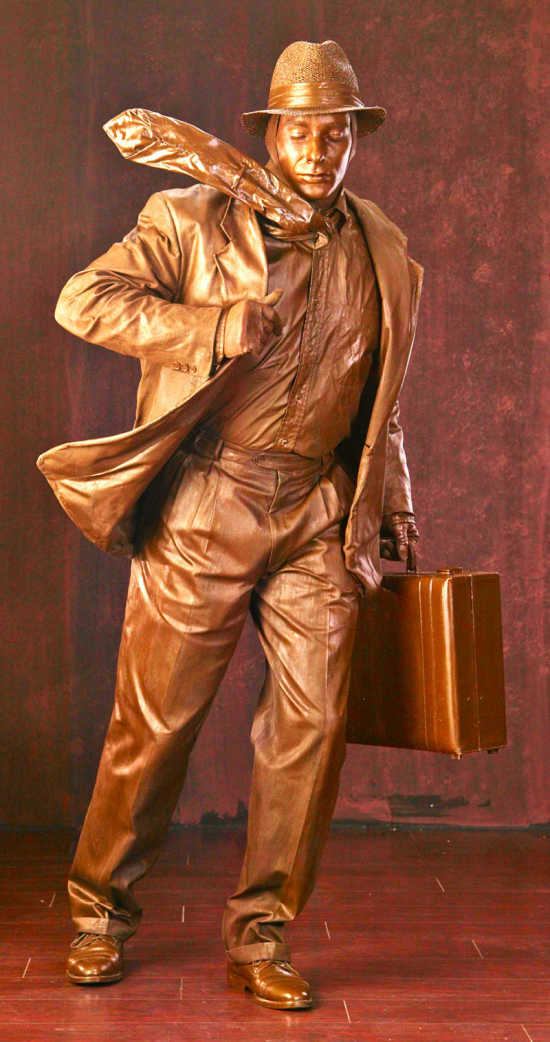 Internationally known performer Mark Abbati will appear as the "Bronze Businessman," one of 75 characters he assumes in a silent, motionless poses act he will bring to Greencastle Jan. 31 for an Ivy Tech scholarship fundraiser.

Now Murray and the group organizing the scholarship event hope the public responds to a performer who has elicited the response of "come work with me" from the most famous mime of them all, Marcel Marceau.

The internationally known Abbati -- who has performed in front of President Reagan, alongside Jerry Seinfeld and in the Macy's Thanksgiving Parade -- along with entertaining governors and school children alike -- is a student of Marceau with 30 years experience as an interactive character performer.

At both the Bags & Bubbles event at Ivy Tech and Beer & Barbecue Super Bowl event at The Swizzle Stick (as well as during an anticipated visit to other of the Greencastle schools earlier in the day) Abbati will appear as the Bronze Businessman, complete with briefcase.

Abbati will entertain first at the Bags & Bubbles gathering, where attendees will get the inside scoop on fashion trends and accessories and witness a style show featuring local models, including Greencastle Mayor Sue Murray. They will also enjoy food and libation from 7-9 p.m. at Ivy Tech Community College, 915 S. Zinc Mill Rd., Greencastle.

He will follow that performance no later than 8 p.m. at The Swizzle Stick, 17 W. Franklin St., where the Super Bowl kickoff event will feature barbecue, brew and live music.

Dinner will be served 7-9 p.m., featuring The Swizzle's ribs and pulled pork, gourmet macaroni and cheese and Vermont slaw, all served alongside Indianapolis' own Sun King Brewery Cream Ale (complete with a free growler to take home).

After their event, Bags & Bubbles attendees are invited to join the Beer and Barbecue crew at The Swizzle Stick to complete the evening as live music by 15th and Hulman will begin at 9 p.m. at The Swizzle and continue until midnight.

Tickets for both events are $50 per person and are available while supplies last (seating at The Swizzle is limited to 64 guests for the evening).