Eliminate or reduce Indiana's business personal property tax? That has been the bold suggestion of Indiana Gov. Mike Pence.

But judging by local reaction to the idea at Saturday's Legislative Update session at the Farm Bureau board room in Greencastle, the governor won't be getting much support locally.

And County Council President Darrel Thomas not so adoringly referred to the Pence proposal as "the elephant in the room." 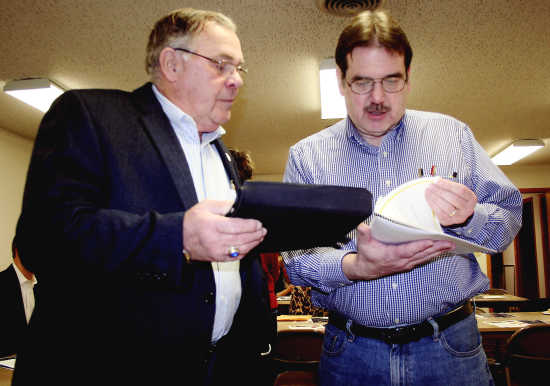 Gov. Pence, however, sees the legislation as a step toward making Indiana an even more attractive place for businesses to relocate and/or expand.

Currently, the tax generates an estimated $1.1 billion for cities, counties, schools, libraries and other units of local government, according to a Legislative Services Agency report.

The tax is imposed on equipment used by businesses. Such personal property can be a newspaper's printing press, a factory's metal-stamping machinery or auto parts maker's injection-molding press. The report notes that it amounts to about 14.5 percent of Indiana's taxable property value.

In a speech earlier this month, the governor said the business tax "discourages companies from investing in new technology and expansion."

Calling Indiana the "most manufacturing-intensive state in the nation," Pence said the state is "holding back new capital investment" because of its business personal property tax.

While calling for the elimination or reduction in the tax, the governor has said he would let the Indiana General Assembly determine how or if the revenue would be replaced for local governments.

"That may be great for business," County Councilman Thomas told Rep. Jim Baird (R-Greencastle) and State Sens. Pete Miller (R-Avon) and Rodric Bray (R-Martinsville) at Saturday's first Legislative Update of the 2014 session. "But don't put it on the shoulders of the taxpayer, which is where this seems to be heading.

"The governor wants to take the bull's-eye off his back," Thomas continued, "and put it on mine. From my point of view (as a county councilman), that's not fair."

Without other changes or replacement revenue, cities and towns would be hit hardest by the tax elimination with some $175 million in total losses, according to the report. Hoosier schools would also be big losers at about $151 million.

Thomas said he couldn't imagine how he could explain the lost revenue and any replacement of it to the four local school corporations, taxpayers, Chamber of Commerce and the economic development office.

Business personal property tax would make up more than 23 percent of the city's assessed valuation for that period, the report noted.

"There's so much intertwined in this," Mayor Murray said, pointing to how the lost revenues would impact how schools are run, streets are paved or plowed and city departments operated, as well as how setbacks in all that would impact the decisions of business people thinking about relocating or expanding here.

"If I can't keep the streets up," she stressed, "they're not going to want to come here."

Mayor Murray presented each of the local legislators with a copy of City Council Resolution 2014-1, which opposes legislative to reduce or eliminate the business personal property tax.

The resolution points out "the proposed plan to reduce the business personal property tax would inevitably result in an across-the-board hike in real property tax rates, representing yet another transfer for the tax burden from businesses to individuals and disproportionately affecting homeowners in communities like Greencastle."

The measure concludes by noting that "a policy position is clearly stated by the Common Council of the City of Greencastle that the Indiana Legislature should not pass any legislation that could reduce or eliminate the business personal property tax."

Legislators present Saturday seemed to side with local representatives but indicated it is probably too early to pass judgment on the proposal.

"We have to decide if this step is necessary," Sen. Bray said, reminding the group that during opening remarks for the program, Rep. Baird indicated the business tax proposal was "going to be a long process."

"The whole General Assembly is aware (of how the measure might impact local government)," Baird assured, assuming the conversation. "There is a lot of discussion yet to happen. We're in the very early stages of this."

Nonetheless, being a one-time county commissioner, Baird said he is "very concerned about the impact it's going to have on units of local government."