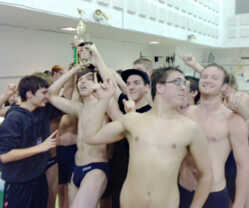 The lady Cougars finished fourth to round out a solid day for both teams.

"I am extremely happy with how we competed today," coach Tony Gray said. "Because of the snow we were out of the water for over a week, so this week was really tough on the kids. Before the meet we talked about how the day would be about overcoming our fatigue and competing, I told the kids to get in and race."

The coach credited the Cougars' depth for the victory, as they fought for second, third and fourth-place finishes, which made the difference.

"We got solid leadership and individual first-place performances from seniors Dane Gray and Trevor Troyer," Gray said. "Senior Nick Kaufman teamed up with Andy Rogers, Trevor Sheldon and Cameron McPherson to win the 200 free relay and turn the momentum our way."

Top performances on the girls' side were turned in by Elizabeth Alford and Rebecca Muse.

The Cougars are in action Thursday at Cascade.