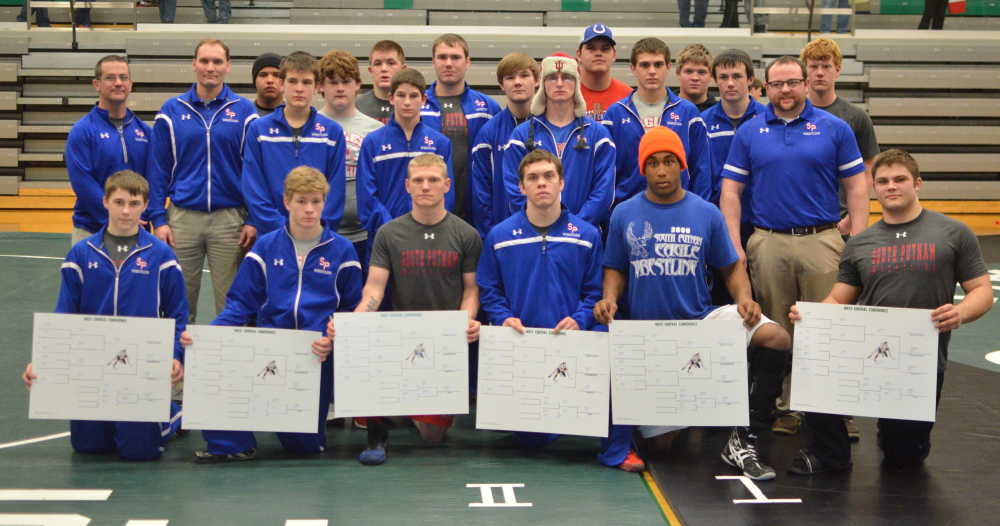 CLOVERDALE -- A year ago, South Putnam's wrestling squad was on the wrong end of a three-way chase for the WCC title, falling to champions Cascade and runner-up Greencastle by a total of 13.5 team points.

With six individual champions Saturday at Cloverdale, the Eagles picked up their second conference title in three years by breezing past the second place Cadets 195-162.

Monrovia finished third in their final WCC wrestling meet on 144 points, followed by North Putnam's 137. The host Clovers finished above the Tiger Cubs for fifth place.

South Putnam sent seven wrestlers to the championship matches and came away with titles from Nick Owen, Jacob Lorimer, Joe Waters, Kyle Shaffer, 195 No. 8 Rudy Harris and 220 No. 14 Jacob Williams.

Eagle coach Josh Hendrickson said the wrestlers knew the meet was likely to be close and that the squad stepped up the challenge.

"We came out, did what we were supposed to do and we executed well," Hendrickson said. "We knew it would be tight between us and Cascade, so we bumped (Lorimer) up to 132 pounds, which was a good spot for him.

"We had all but one wrestler place and he was injured in the match. We talked all week about getting bonus points and the kids came through getting pins.

"We also said that third and fourth-place finishes win tournaments. It always does and it did again today."

Cougar coach Bucky Cramer noted that his young wrestling squad had already made improvements since a fifth-place finish last season.

"We have a lot of freshmen on this team and most of them placed," Kramer said. "I'm happy with that because the kids have worked hard to get where they are. We improved from last year and that's important to us as well.

"We lost in some areas where we thought we might pick some points up but we knew that South Putnam, Monrovia and Cascade were going to have champions and we would have a lot of third-place finishers.

"It's hard to win a tournament when you've got a lot of third and-fourth place finishers but it's improvement over guys taking fifth and sixth last year."

Cloverdale had no individual champions but overcame Greencastle with three second and three third-place finishes.

Clover coach Christian Frye said the squad had mixed results on the day but had decent results overall.

"I feel that we had some missed opportunities," Frye said. "There were a few matches where we wrestled hard but just didn't come out in the right position. We thought we might have a few champions so we were disappointed with that.

"We had several kids step up and place better than we expected. Patrick Jackson picked up a fourth-place finish but got hurt right at the end of his match."

Greencastle finished with two champions in Ryley Cook and Aaron Langdon, along with a pair of runner-up results from Trae Carrington and Riley Jayne.

Tiger Cub head coach Logan Kuhne said that even with a small squad the team was looking for better results.

"With the guys we had, we were hoping one or two more guys would make the finals," Kuhne said. "Riley Jayne, one of the hardest working guys on our team, made the finals and we're proud of him.

"Trae Carrington wrestled better against (Hunter) Fox, who's a very tough wrestler. We're proud of both Aaron and Riley for their championships."

With two weeks until the Avon sectional, all four Putnam County schools have at least one more match to navigate during the final stretch.

Greencastle will host Danville on Thursday and Kuhne said the extra time would be beneficial for the squad.

"James Brown is coming off injury and needs mat time to get back some of his conditioning," Kuhne said. "Otherwise, it is mostly individual things. Everyone has something they need to get better at to take it to the next level at sectionals."

North Putnam travels to South Vermillion Wednesday before hosting an invitational with Cloverdale among the scheduled opponents.

Both head coaches said the time would be needed to keep improving their squads.

"We need to work on pinning combinations," Kramer said. "We need to keep working on conditioning and some of it is just keeping our heads with what we're doing and learning. With these young guys, a lot of it is handling the pressure now."

Frye added, "We need to wrestle smarter in the next couple of weeks. That way, we are not getting stuck in bad spots like we did today."

South Putnam faces fellow sectional opponent and No. 14 Avon on Wednesday, a matchup that will show the Eagles where they stand in the sectional according to Hendrickson.

"We need to pound on the details," Hendrickson said. "Avon's a tough wrestling team. We have to work on some of the things that Avon will run against us that other teams might not.

"After that, we have to get back to the basics. We have to get back into the habit of practice. Some of the kids' bodies are still tired from the long layoff and hopefully we get back on schedule in the next two weeks."