Roachdale's Myers is BG Teacher of the Month 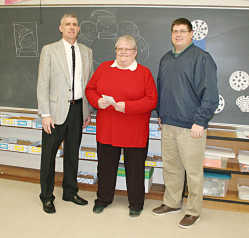 ROACHDALE -- With a kids-first attitude and a passion that doesn't end at 3 p.m. each day, Roachdale Elementary School teacher Debra Myers was recently named the Banner Graphic Teacher of the Month for December.

With retirement on the horizon at year's end, Myers has shown no signs of slowing down, which is one of the reasons Roachdale Principal Scott Spencer nominated her for the award.

"Mrs. Myers loves her job as the art and music teacher at Roachdale Elementary School, but sadly she plans to retire at the conclusion of the 2013-14 school year," Spencer wrote in his nomination. "So far this semester, Mrs. Myers has conducted two outstanding student musical programs for parents, grandparents and the community.

"Her talent, imagination and vision will be missed at the school."

They are talents that have benefited generations of Putnam County students.

The Ladoga native did her student teaching in the North Putnam corporation before spending the first two years of her career in the South Putnam district.

"I've always been active in music here at Roachdale because our music teacher was only here two days a week," Myers said. Beginning in her first year, she organized a school choir, which she maintained throughout her time as a fourth-grade teacher.

Nearly a decade as an art and music teacher has helped keep teaching fresh and fun for Myers.

"Look at all the neat things you get to do," Myers said, noting special projects such as a digital photography class, plays the kids produce and an end-of-year art show.

She also enjoys what she calls the "ah-hah" moments when kids begin to make connections between the various subjects they study in school.

Myers said that recently while she was teaching the song "Do-Re-Mi," the kids immediately connected to "The Sound of Music" and the recent television production starring Carrie Underwood.

The lesson continued and got deeper, though, as the kids began asking questions about World War II and Nazis and the period in which "The Sound of Music" is set.

"I enjoy when you see things light up in the kids' eyes," Myers said, "when they can relate."

While she still loves her job, Myers said she can see that maybe it is time to move on to a new chapter in her life. Not only were Roachdale's current principal (Spencer) and counselor (Dan McMurtry) students when she started there, she recently taught a grandchild of one of her first students.

One key in her future endeavors will be working with children.

"I love teaching. I love being with the kids," Myers said. "I don't know what I'll do. I can't sit at home and be idle."

Two opportunities have already presented themselves in the chance to work with the libraries in Ladoga and Waveland.

Additionally, she will enjoy time with her husband Johnny, as well as her three daughters and six grandchildren, with two more on the way.

For now, Myers has been recognized with a $50 gift card presented recently be Banner Graphic General Manager Daryl Taylor.

Myers said the honor came as quite a shock, as she was told of it three different times before she ever knew anything about it.

Eventually, she contacted the Banner office herself to find out more.

"It was in the paper and everybody knew about it but me," Myers said. "I was totally shocked. I am deeply humbled by it and consider it a great honor.

Nominations for the January Teacher of the Month close at midnight on Wednesday, Jan. 22. Voting will be open from Jan. 27 through Feb. 1, with the winner announced in early February.