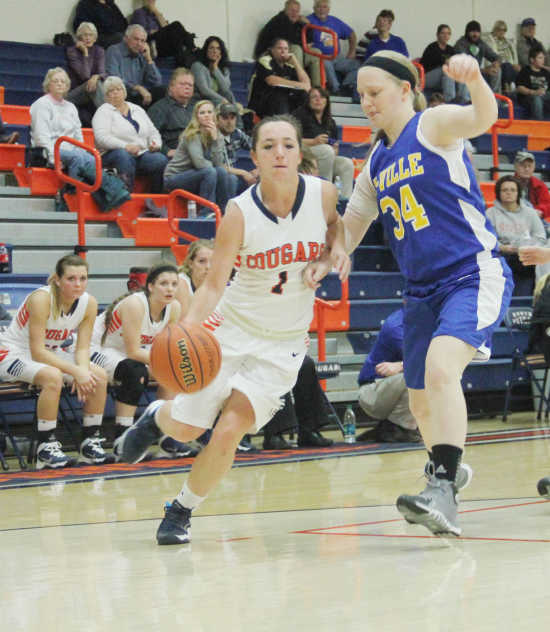 Senior guard Alexandria Land, pictured her in a December game, scored 11 points for North Putnam in a Monday win over Eminence and led the Cougars with seven points in their Tuesday loss to Southmont. (Banner Graphic/GRANT WIEMAN)

ROACHDALE -- The Southmont Mounties visited the North Putnam Cougars home floor for a night of entertaining girls high school basketball action. The Mounties pounded away and went home with a 55-28 win.

"We did pretty good, we worked on a few zones and a few different defenses that we want to use later in the week. Overall it was a really great effort, all of our girls got in. It was pretty good overall," SHS coach Chloe Allen said.

"We were tired. This was our fourth game in five days. It showed defensively we were tired. Southmont is a good team and we got killed on the boards," NPHS coach Curtis Lawrence said.

The Mounties (9-5) started the game out on fire and never let up, putting the host Cougars (2-12) in the hole early 21-6 after the first quarter.

After the first quarter the Cougar defense stiffened up and only allowed 34 Mountie points the rest of the game. Even though the Cougars started getting out on shooters and contesting shots better, the inside game of senior center Alexa McKinsey got the best of the Cougars on the night.

McKinsey scored a game-high 19 points and added eight rebounds, five of which were offensive, over the much smaller Cougar lineup.

"She was on fire in the first half. She was unstoppable in the first quarter and was able to hit almost everything down low and even the jumpers. She did a great job," Allen said.

"We have to learn to shot fake and we do not do a good job of that. They got a lot of easy deflections and blocks against us because we just turn and put the shot up instead of turning and trying to get them off the ground," Lawrence said.

In the first four minutes of the fourth quarter the Cougars went on a 9-0 run to cut the Mountie lead to 21 but the Mounties held on to take the game.

Both teams did see some things that they will have to work on in the upcoming weeks in preparation for sectionals.

"Our guards still need to be more active and more aggressive. We have started to notice that our bigs are getting doubled quite a bit. For the most part though our guards did step up." Allen said.

"We have to work on defense still to get to the point where we slide our feet and we need to work on shooting," Lawrence said.

North Putnam plays next on Friday, January 24 at home against Cloverdale.