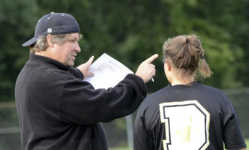 DePauw head women's soccer coach John Carter has announced his resignation from the University to pursue other career opportunities. Carter also serves as the coordinator of DePauw's indoor tennis and track center and a part-time Instructor in Kinesiology.

"I want to thank John for his years of service to DePauw University," said Stevie Baker-Watson, Theodore M. Katula Director of Athletics and Recreational Sports.

"He has led our women's soccer program since 1990 and directed our teams to both conference championships and the NCAA national tournament. We are grateful for his leadership and wish him the best of luck in his future endeavors."

Lisa Link, DePauw assistant athletic director, will serve as the interim head coach as the national search moves forward. Link captained the North Central (Ill.) College women's soccer team for two years before graduating in 2009. She then served as a graduate assistant coach for two years at her alma mater before joining the DePauw athletics staff in 2012.