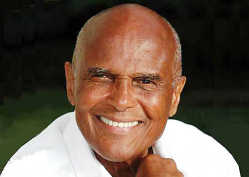 Harry Belafonte, known worldwide as much for his social activism and pursuit of social justice as he is for his acting and musical talent, will make a return visit DePauw University on Wednesday, Feb. 12.

He will deliver the Johnson-Wright Lecture in Conflict Studies to Honor Russell J. Compton in a free program that will begin at 7:30 p.m. in Kresge Auditorium of the DePauw Green Center for the Performing Arts (605 S. College Ave.). The lecture is presented free of admission charge and is open to all.

One of the most successful African American pop stars in history, Belafonte was dubbed the "King of Calypso" for popularizing the Caribbean musical style with an international audience in the 1950s.

"Calypso," released in 1956, was the first million-selling album by a single artist and contains his best-known song, "Day-O (The Banana Boat Song)." He has recorded in many genres, including blues, folk, gospel, show tunes and American standards and starred in a number of films, including "Carmen Jones and Island in the Sun."

Belafonte has won three Grammy Awards (among them a Lifetime Achievement Award), an Emmy Award and a Tony Award. In 1989 he received the Kennedy Center Honors and was awarded the National Medal of Arts in 1994.

Belafonte, who turns 87 on March 1, was a confidant of Dr. Martin Luther King Jr. and has been actively involved in the civil rights movement and humanitarian causes throughout his life. The driving force behind the 1985 "We Are the World" project to help people affected by war, drought and famine in Africa, Belafonte has served as a UNICEF Goodwill Ambassador since 1987.

In 2011, Belafonte published "My Song: A Memoir." Somewhere amid the accounts of when he became "the first artist to sell a million copies of an album, the first black leading actor to romance a white leading actress in a major Hollywood film, and the man who was asked to help pick out the clothes that Martin Luther King Jr. would be buried in, you realize just how extraordinary Harry Belafonte's life has been," wrote the Boston Globe's Sarah Rodman. "If Belafonte had simply pursued one strand of that life -- the immensely popular singer, the Tony Award-winning actor, the powerful political and social activist -- it would have made fascinating material for a book. That he managed to cram all three into his 84 years makes 'My Song,' his captivating memoir written with Michael Shnayerson, not only a sometimes exhausting chronicle of Belafonte's own story but an intriguing look at U.S. history from the late '40s to the present."

On Sept. 7, 2002, Belafonte came to DePauw to present an Ubben Lecture.

"America must begin to understand that the weakest link in our chain is our indifference to the sufferings of other people," he told a packed house in Meharry Hall of historic East College.

"It is those who have and the extent to which they want to stay that way, at the expense of those who do not have. If these inequities prevail, if they continue to suffocate us, you'll find villainy and terrorism as a constant value in our lives."

Through the Compton Lecture Series, which began in 2011, the conflict studies department at DePauw aims to create dialogue on campus while remembering the legacy of Dr. Compton, who taught religion and philosophy at DPU from 1951 until 1974 and remained a presence on campus until his passing in 2007 at age 98.