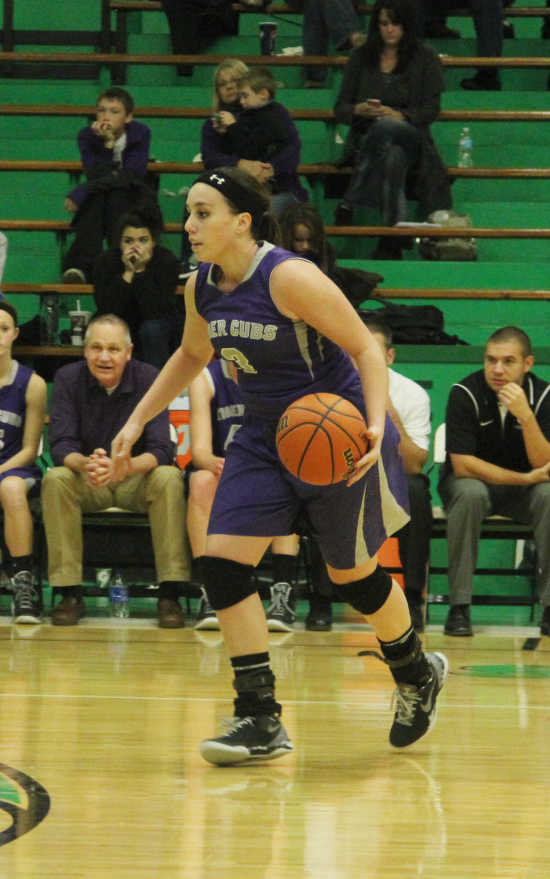 The Greencastle Tiger Cubs girls' basketball team hosted 2As 14th-ranked Covenant Christian Tuesday night. GHS was coming off a heart-breaking loss from Friday night, but they got the job done Tuesday 48-39.

"I thought (GHS) had a great effort Friday night," GHS coach Bradley Key stated, "I thought (GHS) fought very hard. We watched the film and seen some things we did not manage well on, but I just wanted us to come out and fight the same way."

The schedule did not get any easier for them Tuesday. The Warriors of Covenant Christian (12-6) posed a mental threat with their season's tactics. Being a highly ranked team made it no easy challenge for the Tiger Cubs.

Greencastle did not let that phase them as they got out and performed early. They stopped the Warrior offense and took advantage of their sleepy defense.

Greencastle had a great fight going their way. The offense and defense both transitioned nicely while CCHS was having trouble on all ends.

GHS senior Alex Basile added to the Warrior's troubles when she was fouled on a three-point attempt. Basile knocked down all three attempts at the line and made it an 11-point Tiger Cubs' lead at the end of one.

"It helped that we came in and hit some shots, but more importantly our defensive rotation was great," Key said.

Covenant Christian had its first quarter troubles but it seemed to figure out the Tiger Cubs' plans in the second. They started using the same attack that GHS was using and it worked.

Greencastle started turning the ball over more in the quarter and kept missing shots.

CCHS had everything they wanted, a fast pace, easy shots and good defense. Their only problem was they could not hit shots.

Despite the dominance, the Warriors only scored eight points. Their defense held GHS to only seven points and cut the lead to 10 at the half.

Covenant Christian needed some kind of boost if they wanted a chance to survive. They got it in the early stages of the third.

The Warriors went on a 10-0 run in the first two minutes. Two big threes and two lay-ups on four straight possessions tied it up and it looked like GHS had finally been outlasted.

"Basketball is a game of runs," Key noted, "(CCHS) is obviously going to make some. They are a good team, but we had to tell our team to keep making the right decisions."

The Tiger Cubs in that two-minute span had four turnovers and could not get the ball moving.

It looked like all hope was lost, but Coach Key still had confidence. Instead of taking a timeout, he let his team play and it got them calmed down.

Covenant Christian cut into the lead in the second and third quarters but only by one point each. They needed to have a monster fourth quarter if they wanted to steal the win.

The start of the final quarter went well for Greencastle. They made shots and held the ball for long stints of time. Junior Lauren Bridgewater hit two threes to help the cause.

GHS was finishing off what would be a strong win. That was the case until CCHS sophomore Kylie Bright hit a three with a minute left to cut it to four.

Up to this point Greencastle had been trying to hold the ball as long as possible. When the three was made, that mindset changed.

Immediately the Tiger Cubs tried moving the ball to the inside. It was shut down, but a lane was opened for Basile to drive herself. She went in and dialed up a contested lay-up. She was also fouled for an and one.

Basile hit the free throw and put it back up to a seven-point lead and with 16 seconds left GHS sophomore Allison White hit the game clinching free throws and finalized the game 48-39.

The ball movement was a big portion of Greencastle's winning effort. Especially when they wanted to waste time, the offense made good passes. Someone always got open and made it easy for the ball-handler.

"The difference from the beginning of the season to now is that our players believe in the offense," Key said, "(GHS) does drills everyday and always improves. The fourth quarter was an excellent example of that work when we wasted time off the clock."

On 15 made field goals for GHS they had eight assists to show for their passing. Three of those assists came from junior Callan Taylor. She made three big passes to junior Lauren Bridgewater who made three threes in a row.

Like Friday, against Cascade, the three point shooting was a big margin of the offense for Greencastle. They hit seven threes for 21 of their points.

Coach Key said that they have been shooting the three-pointers all year. He says that they are starting to make more of them because of the passing.

This is a big confidence builder for Greencastle and they will try and convert that over to Friday when they host county foe North Putnam.