Clovers get first-ever victory over Warriors 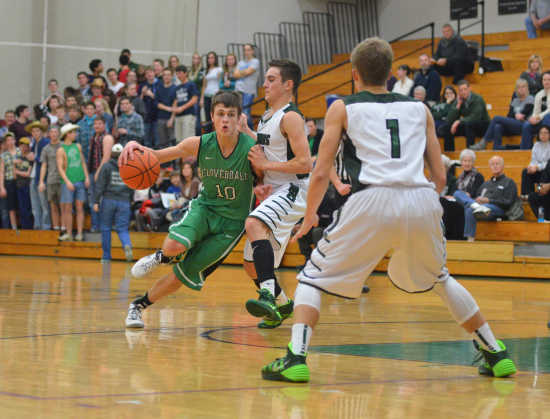 Cooper Neese was one of two Clovers with 20 points, chipping in 21 on the night. (Banner Graphic/TRENT SCOTT)

INDIANAPOLIS -- To the casual observer, a trip for Class 2A No. 12 Cloverdale to Covenant Christian High School would be the chance for another win to add to its already impressive 11-1 mark.

But those familiar with the series could also tell you the Clovers had never before beaten the Indianapolis school.

That streak finally came to an end Tuesday night after a late flurry from the hosts to tie the game at 59-59 all ended with a pair of turnovers, three Marquise Moore free throws and a 69-65 win for Cloverdale.

Clover head coach Pat Rady, who was honored by the home team before the game for his service to Indiana basketball, said that keeping things simple helped guide Cloverdale to a win.

"This is the first time we've beaten them in the history of the two schools, so this is a big win for us," Rady said. "We've always had a tough time up here as they play a good schedule."

Despite a 5-6 record heading into the contest, Covenant Christian came out swinging against a Cloverdale team used to big early leads.

Both squads shot early, often and with intent as the opening period closed with the score tied at 18.

The Clovers slowly began to build up a sizable margin in the second quarter, leading by as many as 14 points at 39-25.

A quick 6-0 run just before halftime, including a three-quarter court buzzer-beater by Jonathon Bradley, kept the hosts close at 39-31.

Rady said that by keeping things simple, the Clovers were able to get the lead at halftime.

"We wanted to keep our turnovers down and we only had eight for the game and three at halftime," Rady said. "We tried to pressure them and put them in situations where they weren't comfortable. We were able to play some possession ball and we had some success with our press."

Cloverdale would not be able to extend the lead as the game evolved into a round of scoring in the third, with the Clovers leading 55-48 after three quarters.

Things got dicey for the visitors when the Warriors put together an 11-4 run to open the fourth quarter and tied the game at 59.

Moore hit three free throws and a Kade Schroer layup re-established a five-point cushion. Baskets were exchanged before a foul call on Branston Scott saw the junior foul out and the Warriors get a pair of free throws from Trevor Johnson.

On the inbound play, Cooper Neese lost the ball and a Keaton Joseph basket closed the gap to 66-65.

Schroer was fouled but missed the front end of the one-and-one, seemingly setting up Covenant Christian for a chance to win.

Moore, however, picked the pocket of Johnson and was sent to the line where the Clover junior hit one of two free throws.

Trailing by two, the hosts promptly turned the ball over and fouled Moore again on the inbound.

Moore sank both free throws to give Cloverdale a lead it would not surrender in the final eight seconds and a first win over the Warriors in school history.

Rady said producing in crunch time would be pivotal for success later this season.

"This is the type of game that helps you get ready for the tournament," Rady said. "It was a ball game they had to play possession by possession. They couldn't relax or take a possession off.

"We had to make stops, get a key rebound or a free throw. These are the type of games that make you get better and give credit to the players. We added some new things tonight we'd only worked on one night. We were pleased with the way they did things tonight."

Cloverdale will host South Putnam Friday and Rady said that an effort like Tuesday's would be required for a win over the Eagles.

"South Putnam's well coached," Rady said. "They're going to come in with a lot of desire and we have to play another game like tonight. We've got to be at the top of our game Friday night."