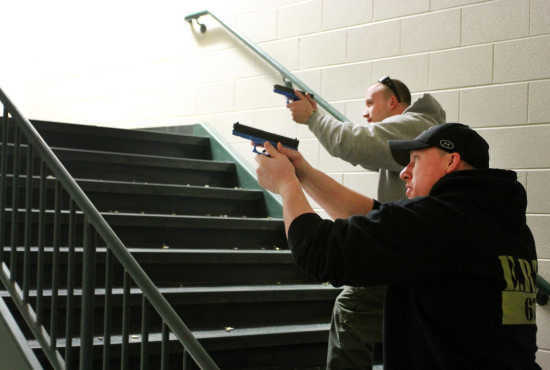 CLOVERDALE -- The Cloverdale Community School Corporation staff recently got a peek into the amount of preparation and training that Putnam County law enforcement officials go through to keep schools safe.

With the rise in school shootings, emergency personnel go through specialized training each year, often reviewing some of the most recent cases.

The four-hour training day consisted of a PowerPoint presentation, which covered past active shooter events as well as statistics from several other past shootings.

"That allows us to set our scenarios up using bits and pieces from those past events," Baugh said. "The PowerPoint presentation was a combination of training that everybody can benefit from."

Following the PowerPoint presentation, different scenarios were played out followed by a question-and-answer session. 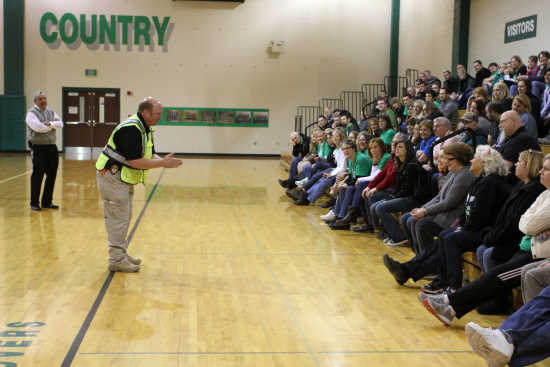 Officials and staff also watched a short video that gave staff members a description of actions that they can take in the event of an active shooter.

"These things are scary in general," Baugh explained. "This gives the opportunity for these teachers to be trained and see what they might be able to do (in a situation like this). We watched a video 'Run, Hide, Fight.' It's only a six-minute video, but it says a lot. We recommend that everybody watches this video."

Following the presentation by Baugh, staff got to watch a live demo of what a active shooter situations would look like, that included students running down the hallways while officers made entry and engaging the shooter. They were also introduced to what live bullet rounds would sound like.

Officers then participated in three breakaway sessions while staff set in the classrooms as if they were students being held by a shooter while officers made entry engaging the suspect, consisting of several single officer oriented drills, as studies show that 70 percent of the time when police stop a shooter it's done by a single officer. 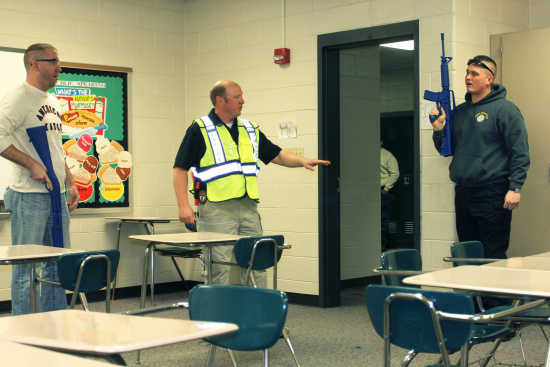 "Our training is based off of the statistics. When a single officer does go into an incident like this, 14 percent of the time the officer gets shot," Baugh said. "That's why a lot of our drills were single officer oriented. There is a good probability that you won't get shot going into one of these incidents by yourself."

These breakout sessions not only allowed law enforcement officials to do skills training, but also allowed teachers to sit in on each of the drills.

"They (the teachers and staff) get to see it and maybe get some confidence in them," Baugh said.

"We know of situations in the past and what has happened, but every future one is going to be different. The teachers need to be able to think. It's hard to write a policy of every single thing that could happen. We try to give them as much information as we can so they can make their own decision when it comes to the safety of the kids."

With the number of school shootings on the rise, law enforcement officials are constantly receiving new information and training tactics.

"Unfortunately, the amount of incidents is on the rise and every year there is always something else that comes up, but we can train to that and we should. New issue, new training skill," Baugh said.

In February Baugh, Hopkins, Akers and Sutherlin along with Paramedic and Greencastle Police Officer Jerett Query will also be teaching officers trauma care that includes treating injuries that might be sustained from a shooting incident.

"We hope that parents of school children understand that we are constantly training for this," Baugh said. "We're doing something to prepare for it."