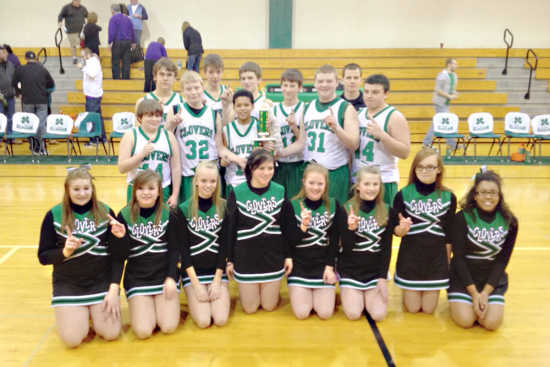 CLOVERDALE -- The Cloverdale Middle School eighth grade team picked up a championship with a pair of double-digit wins over Riverton Parke and Clay City on Saturday, Jan. 25.

The Clovers kicked off the day with a 37-21 win over the Panthers.

Jaylen Moore led CMS with 13 points, followed by Drew Boyette, T.J. Hagymasi and Tyce Jackson with six each. Nick Winders added three points, with Tyler Kaeff chipping in two and Nick Smith closing out the scoring with one.

In the championship, Cloverdale downed the Eels 43-31 to take the title.

Moore had a monster game with 31 points. Hagymasi added five and Winders four more. Boyette had two points and Jackson scored one.

"This was a great, hard-fought game as at halftime the score was Clovers 21-20," Moon said. "The boys were hustling and playing hard all four quarters."

Cloverdale's seventh and eighth grade boys' basketball teams concluded the season on Monday with a double header against Owen Valley.

"I was very pleased with the way we rebounded and guarded inside," coach Billy Boyette said. "Kenny Perry and Parker Watts had 14 rebounds each. Jaren Rossok had four blocks inside. Elliot Williamson had one block. Great job."

The Clover eighth grade finished the season 6-5 with the loss.

"I was very impressed with the defense Owen Valley played," Moon said. "They just take us out of our gameplan."

Moore led the Clovers with 11 points, followed by Hagymasi with five, Winders with four and Kaeff with two. Jackson and Noah Dean each had one point.