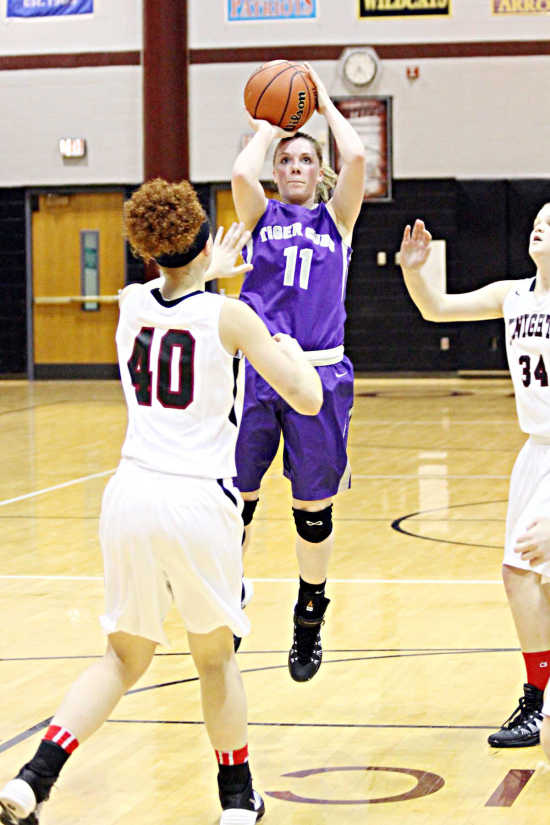 Greencastle guard Callan Taylor rises up for two of her game-high 18 points in Monday's victory over Northview. (Brazil Times/CAREY FOX)

BRAZIL -- If Greencastle wanted a tune-up heading into the girls' basketball sectional next week, the Tiger Cubs got just what they were looking for at Northview Monday evening.

The Tiger Cubs built a seven-point lead late in the fourth quarter before withstanding a frantic rally by the Knights in the final two minutes to gather a 46-43 road win.

Greencastle coach Bradley Key was excited to see his team pick up a victory in a tough environment.

"It was a sectional-type atmosphere, the crowd was kind of fun and they had the band over there. It felt like a big time game," Key said. "Hopefully we can learn some lessons from our mistakes and take that into the sectional."

The Tiger Cubs built their lead from beyond the 3-point line, hitting 7-of-19, including a pair by junior Callan Taylor in the third period. Paige Bragg added another as Greencastle built a 38-32 lead heading into the fourth period.

After the Knights got a bucket from 6'1" junior Mikayla Rowan to start the fourth quarter, Lauren Bridgewater drilled a 3-pointer to put Greencastle ahead 41-34. Alex Basile added two free throws with under two minutes remaining for a 43-36 lead for the Tiger Cubs, but the Knights showed some mettle.

Greencastle had held Rowan, the Knights' leading scorer, in check with just five points through three quarters. However, Northview turned up the defense and got Rowan more involved down the stretch.

Rowan completed a three-point play after she stole the ball and then stole the inbound pass by the Tiger Cubs and hit a jumper. Sydney Buell then knocked down a pass, saved it to Rowan, who scored for a personal 7-0 run in fewer than 30 seconds. Suddenly the game was tied with under a minute remaining.

"She's a player for sure. You always want to make sure where she is at. At the end, we kind of let her go, but that is what good players do," Key said of Rowan.

Bridgewater gathered in her own missed shot and hit a free throw with 23 seconds left and after a turnover by the Knights, Basile added two from the charity stripe. Her shots put the Tiger Cubs ahead 46-43 with 5.2 seconds left.

A last 3-pointer by the Knights' Stacy Payton bounced off the rim to seal the victory.

"I'm really proud of my team to hold on to that win. What big free throws by Alex Basile as a senior to step up there and hit those," Key said. "I'm just so proud of her and the leadership she showed. I keep telling (the team) that with two guards you can go pretty far and we've got two of them."

While Taylor tallied a game-high 18 points, including four 3-pointers, Greencastle placed everyone in the scoring column.

"We've got a real good group of players, looking at the statistics, everyone that played scored, which is huge. We're usually led by Callan (Taylor) and Alex (Basile), but tonight when we needed a big three-pointer, Lauren Bridgewater stepped up and Paige Bragg stepped up.

"This is a big team win," Key added. "If (Northview) is going to take away the inside with their size you have to knock down some shots," Key said. "We were able to do that at key times."

Greencastle improves to 11-7 overall and hosts Monrovia in the final regular season contest at 6 p.m. on Friday.