Putnam native honored by ISP for 30 years of service 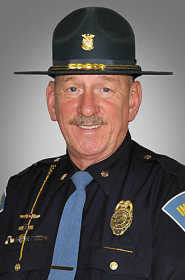 Putnam County native Major Brent Johnson was presented with a 30-year certificate and uniform medallion signifying his 30 years of service.

Upon completion of military service, Johnson applied and was accepted to the 41st ISP Recruit School.

Upon graduation from recruit school, he was appointed an Indiana State Police trooper on Dec. 25, 1983. Johnson was assigned to the former Terre Haute District and patrolled Clay County.

During his time at the former Terre Haute District, he was promoted to squad sergeant, first sergeant and ultimately to lieutenant where he served as the district commander.

Major Johnson spent 16 years on the ISP scuba team and 19 years with U.S. Army Reserves 733 Military Police Company. Johnson is married with four grown children and nine grandchildren and he and his wife live in rural Clay County.