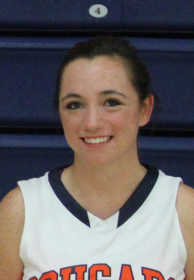 MARSHALL -- The first quarter has played havoc on the North Putnam girls' basketball team all season and it stayed true Monday night.

It was the first quarter that rattled the Cougars, who outplayed the Warriors the last three quarters.

The Warriors took a 15-4 lead after one and the 11-point lead would be enough to hold off the Cougars the rest of the night.

"It was the first quarter that killed us," NPHS coach Curtis Lawrence said, "We outplayed them the last three quarters. We just dug ourselves in too much of a hole. As I tell the reporters, we always seem to have a bad quarter."

Turkey Run had exceptional ball movement and it hurt the Cougars by taking valuable time off the clock. Twice, the Warriors held the ball for over two minutes before attempting a shot.

"I was a little stubborn getting out of the zone," Lawrence said, "In the third quarter we went to a little bit of a trap and that didn't work."

The Cougars finally had to switch to a man-to-man defense, which they typically are not used to. It fared well for the first few minutes and North Putnam was able to take advantage and cut it to six.

"We finally had to go to man-to-man," Lawrence said, "We're typically not a man-to-man ball club, but I thought we did a decent job of it tonight."

The Turkey Run help defense also played a menace on the Cougars. They caused North Putnam to force up bad shots and it went to the favor of the Warriors.

"It was just the aggressiveness (that hurt North Putnam)," Lawrence said, "(Turkey Run) did not allow us to make that next pass and they did a nice job of keeping pressure on the ball."

North Putnam was able to make headway on the boards. The Cougars had eight on the offensive glass and it helped them extend possessions and score points, especially in the second half.

The Cougars really improved on cleaning up the turnovers Monday. A team that usually commits in in the high 20s to mid 30s in the category only had 14, which cut the average in half.

As Coach Lawrence said, the Cougars next game will be the regular season finale Friday night hosting the South Putnam Eagles. The Cougars beat the Eagles 42-30 earlier this season in the Putnam County tournament.

The Cougars will also prepare for the first round of sectionals which will take place next week at Speedway. They will face Monrovia in the opening game of sectional on Tuesday, Feb. 14.