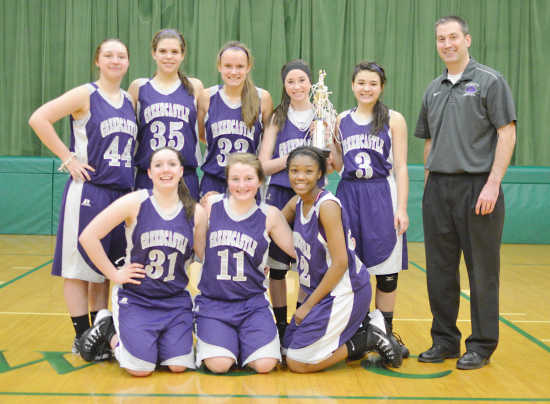 CLOVERDALE -- A month and a half after the Putnam County girls' JV basketball tournament was originally supposed to be contested, Greencastle and Cloverdale finally found a chance to get the title game in.

The wait was worth it for the Tiger Cubs after a 47-21 win Monday night over the host Clovers.

Greencastle JV coach Matt Welker said the squad earned the victory on the back of their body of work over the year.

"We're super proud of the team," Welker said. "We're a small team with six freshmen and two sophomores but the leadership the team has developed on defense and offense, as well as their abilities on both ends, has increased as the season has gone on."

Cloverdale JV coach Daniel Varnes said the squad knew what was coming but struggled to adapt at times during the game.

"We knew they would pressure us so we worked on dealing with the pressure," Varnes said. "We didn't expect a 1-3-1 per se, but we knew from when we played them earlier in the season that they were going to pressure.

"We didn't stick with the game plan or make the adjustments during the game."

Cloverdale looked to try and contain Greencastle's long distance shooters but that left plenty of paint for Mia Stevens to exploit and the sophomore scored a game-high 14 points.

The hosts had chances to take and keep the lead in the first quarter but multiple missed free throws allowed the Tiger Cubs to hold a 9-6 lead heading into the second quarter.

While the Clovers had managed to get past the Greencastle press reasonably well in the first period, things did not go as smoothly over the next six minutes.

Multiple fast break attempts and three-point plays allowed the visitors to extend their lead to 25-14 at halftime.

Welker said that the Tiger Cubs parlayed their defensive efforts into effective play on the offensive end.

"As the season has gone, we've realized that we pull our intensity from the defensive end of the floor," Welker said. "That intensity flowed to the offensive end and we were happy with our shooting and drives.

"The players have really rallied around the defensive part of the game in the last few weeks. At this point, we wish we had more games now because we feel like we're playing really good basketball at the end of the season."

Both squads struggled heavily as defense ruled the third quarter. With both teams pressing, the game slowed considerably but the Tiger Cubs kept a double-digit advantage heading into the fourth quarter.

While Cloverdale's offense could not get out of the funk they were stuck in, Greencastle exploded to life. Six different players scored in the final minutes, allowing the visitors to pull away with ease.

The Tiger Cub defense also continued its fine work and only a basket with :10 left on the clock kept the Clovers from being shut out in the last quarter of the game.

Both JV squads have one more contest to prepare for before the sectionals begin and as the final varsity rosters begin to take shape.

Welker said that with one member of the JV team having already moved up to the varsity level, a final game might give another player a shot to make the Tiger Cub sectional squad.

"The opportunity exists for any JV player through the season to make the varsity roster," Welker said. "The rotation is pretty well set there but every player wants to be in a sectional uniform at the end of the year.

"We're proud of the team and their efforts tonight. They're a super group of players."