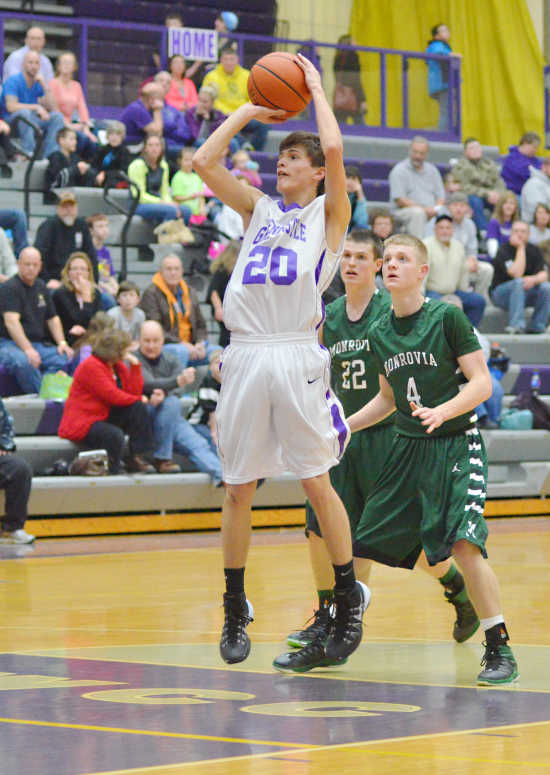 On the same night the girls' basketball squad locked up second place in the WCC, Greencastle's boys' squad did likewise with a 47-40 win over Monrovia Friday night.

A stingy first-half defense set the tone for the game and the Tiger Cubs made plays when it mattered according to coach Troy Greenlee.

"I thought we were able to make enough plays to win the game tonight," Greenlee said. "I also thought that the first half was the best half of defensive basketball we've played in holding them to 12 points.

"We wish we could have kept that intensity in the second half. We had a little bit of a letdown but we made enough plays late in the game on both ends of the floor to win tonight."

Nearly a mirror image of the first game, the Tiger Cubs relied on the distance shooting of Holden King, who finished 5-for-8 from behind the arc to lead all scorers with 15 points.

Defensively, the hosts smothered a poor shooting Bulldog squad and only a 6-4 second quarter prevented Greencastle from being ahead by double digits after a 15-8 first quarter powered by two of King's three-point baskets.

A three-point play by Brody Bollman at the start of the third quarter gave the Tiger Cubs their largest lead of the contest at 24-12 but the advantage slowly shrank as Monrovia finally found its offensive footing.

Any time Monrovia threatened to close the gap completely, though, Greencastle had a response, a trait Greenlee appreciated from his squad.

"These kids are tremendous competitors and I'm proud of the way they handled the game possession by possession," Greenlee said. "When Monrovia scored baskets, we did what we needed to get to the free throw line or get baskets."

Leading 32-25 heading into the fourth quarter, the hosts saw the lead cut to three after four Bulldog free throws went down.

King knocked down his third three of the contest to double the lead and would hit two more late in the quarter to put the game beyond reach for the Bulldogs, securing Greencastle third win in four games.

Greenlee said the game was not as well played as the Tiger Cubs would like but the resolve the team showed in crucial situations did not go unnoticed by the coaching staff.

"Whether we're down or we're up late in the game, we're going to fight until the end," Greenlee said. "As a coach, there's nothing more you can ask.

"Some of our games lately haven't been real pretty but that doesn't matter as long as we're up on the scoreboard," Greenlee said. "It was a great team and effort and hopefully this is something we can build on as we go through a huge stretch of games in the next few weeks."

Greencastle hosts Brown County on Saturday and Greenlee said the Tiger Cubs would need to show how well they would respond to short turnarounds with a flurry of games coming up.

"We have to be aware of our ability to bounce back after back-to-back games," Greenlee said. "That's our first priority. As hard as our kids play, we have to get them enough rest.

"We'll talk about Brown County a little bit, but we need to make sure we're defending like we need to defend and we're doing enough on the offensive end to make a difference. It will be another game like tonight against Brown County tomorrow night."