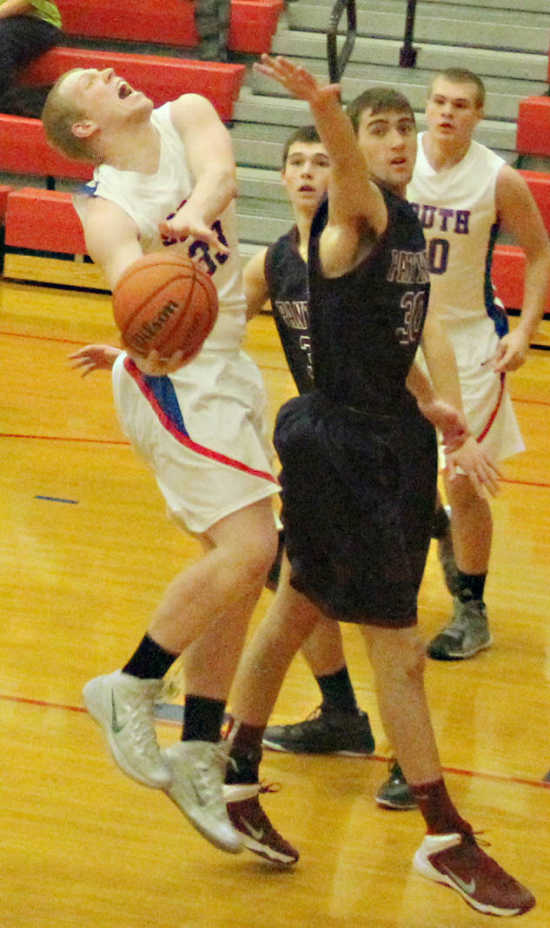 South Putnam senior Trey Moore, shown in a game from earlier this season, scored 22 points for South Putnam on Monday while pulling down 12 rebounds and handing out nine assists. The Eagles defeated Eminence 69-47. (Banner Graphic/JARED JERNAGAN)

It was a loud Monday night at South Putnam High School. The Eagles boys' basketball team hosted the Eminence Eels in a game that turned out to be a very intense, physical matchup.

The Eagles took advantage of the physicality, making 25-of-39 free throws on their way to a 69-47 win.

The gym was rocking, both with fans cheering at the pace of the action and with spectators unhappy with the officials. Eminence fans and the junior varsity felt that too much was going against them and they let the refs hear it.

Despite of the outbursts, South Putnam (3-12 0-5 WCC) fought their way into good situations. Unable get into normal set plays because of the Eels' (5-8) pressure, the Eagles attacked on offense and broke the defense down with the fast break.

"We weren't able to do what we wanted all the time, but I thought we reacted well," South Putnam coach Troy Burgess said, "I thought Trey Moore had his best all around game tonight. He got us into some things and really broke it down for us."

Moore made the most of his night falling just one assist short of a triple-double. He had 22 points and 12 boards. It was his leadership that helped compose the team under the pressure. His passing was key.

The Eagles knew with a double team there was always an open guy and they found him most of the time. Due to the pressure and double-teaming, South Putnam pushed the ball up the court with numbers and created easy layups.

"We attacked the basket," Burgess said, "We got to the basket against their press and that's something we haven't done real well this year. I thought our ball movement was better. When we looked up and attacked I thought that's when we were doing better."

With numbers and fast break opportunities most of the night, the Eagles did not need to make plays; they just needed to stay with the layups they were being granted.

Taking what the defense gave them, the Eagles ran to a 16-4 first-quarter lead and a 35-14 halftime edge.

In spite of the easy opportunities, the Eels made a second-half run.

With the South Putnam missing some of its layups, Eminence was able to get layups and have numbers on its side. The Eels kept the pace fast and beat the Eagles to the rim.

"I thought our kids did a great job of keeping composed," Burgess said, "It got rough and physical for a while and we just kept getting back up and played without retaliation. We handled them very well and I was pleased with the response."

Eminence's problem was when not making shots, it was preventing the hosts from doing the same. A 20-18 scoring edge in the third did little to cut into South Putnam's lead.

South Putnam's defense was also able to get back and put pressure on the shots.

It became a game of who attacked the hardest was going to win.

South Putnam did so, outscoring Eminence 18-13 in the final quarter for the 22-point win.

The Eagles helped their cause by only committing 12 turnovers, well below the season average, and the outrebounding the Eels by 18.

The Eagles are back in action Thursday night when they host Northview at 7:30 p.m.