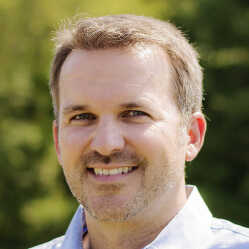 BAINBRIDGE -- Mark Timm knows a thing or two about the importance of giving back. He takes to heart the adage that, "To whom much is given, much is expected." What he received, at a young age, was opportunity. What he returns to others is more of the same, in spades.

Today, Timm is a successful Indiana business owner in Putnam County. He runs Cottage Garden Inc., a multimillion-dollar business headquartered in Bainbridge that sells personalized gifts like music boxes, photo frames and more out of its warehouse facility in the old Kroger building on Greencastle's north side.

He attributes much of that success to the education he received studying agriculture at South Putnam High School and the leadership development he gained as a member of the National FFA Organization.

"Back when I was entering my freshman year in high school, I chose agriculture on the signup sheet as an elective," he said. "When I got my course schedule, agriculture wasn't on it. Instead there was Latin, and I didn't even sign up for it.

"I went to my counselor," Timm continued, "and found out that since I was on a college track, they thought Latin would do more for me, so they clicked the box for Latin instead of agriculture."

The next morning, Timm took his father into school for a meeting with the principal.

"My dad said, 'I believe this young man signed up for agriculture, not Latin," he said. "The principal scratched out Latin and checked the agriculture box and I was in agriculture. If it wasn't for my father and a supportive principal, I may have never found out what FFA was all about."

And that continues to pay off.

"Based on my travels in FFA, the world became much smaller for me. Today the Cottage Garden not only sells in America, we sell in Canada, Mexico, Australia and the United Kingdom," he noted. "The world is our marketplace."

Timm says the FFA taught him leadership skills that have paid dividends.

Timm said that at a young age, FFA taught him that anything is possible. He was elected National FFA president in 1990.

"I traveled throughout the country, more than 200,000 miles, and spoke to close to one million people," he said.

Timm's time in FFA led him to Washington, D.C., where he would eventually work as an intern in the administration of President George H.W. Bush. 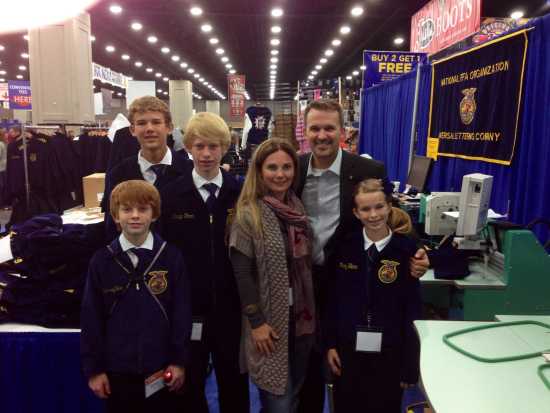 Courtesy Photo
Former FFA national president Mark Timm currently lives in Bainbridge with his wife Ann and their six children, Markus, Kavyn, Zachary, Mary, Cassandra and Grace. Four of the six, shown at the 2013 National FFA Convention, are members of the North Putnam FFA while the youngest two are future FFA members.

Before returning to Indiana to start a family and develop Cottage Garden, Timm worked for the W.K. Kellogg Foundation, the National FFA Organization and USA Today. In January, he wrapped up a year of service as chairman of the National FFA Foundation Board of Trustees.

Serving on the FFA Foundation board provided him a perfect opportunity to give back.

"The programs funded through the foundation provide incredible opportunities for almost 600,000 young students preparing for careers in agriculture," Timm said. "Not only will they be leaders who build families and communities, they are the next generation of agriculturalists who find sustainable ways to provide food for our growing planet."

Donors include major corporations, government agencies, philanthropic organizations and individual contributors. That last group is of special interest to Timm. He served as chairman of the National FFA Foundation's Individual Giving Council and helped develop what is rapidly becoming a highly effective donor base of motivated individuals.

In 2013, the Foundation completed a record fundraising campaign that generated more than $18 million in support of the National FFA Organization and other agricultural education related organizations. Beyond the dollars, Timm sees more opportunities for deserving FFA members.

"All across the country, in high schools large and small, there are students whose lives will be forever transformed for the better because of their experiences in FFA," he said. "None of it would be possible, though, without a caring and committed agriculture teacher. But teachers need resources. Every time we raise a dollar through the FFA Foundation, someone is going to benefit, and that's a great feeling."

Timm will remain on the National FFA Foundation Board of Trustees in 2014 serving as past chairman.

Timm resides in Bainbridge with his wife Ann and their six children, Markus, Kavyn, Zachary, Mary, Cassandra and Grace. Four of the six are members of the North Putnam FFA, while the youngest two are future FFA members.