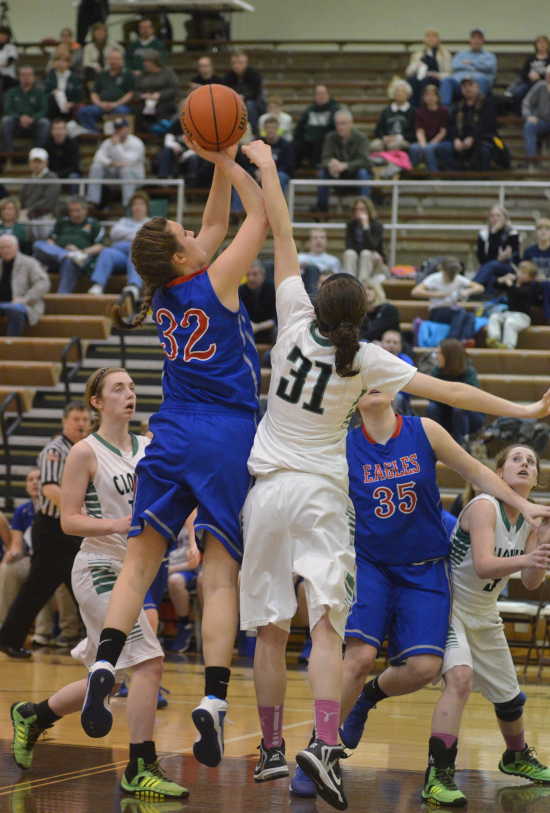 SPEEDWAY -- The South Putnam Eagles girls' basketball team, fresh off a first-round win over Cloverdale on Wednesday, had to wait until Saturday to play the Covenant Christian Warriors due to snow pushing the games off the Friday slate.

"I thought we did a good job," Eagle coach Bill Merkel said. "We let them get that little run early and then we started breaking their pressure and getting something at the other end."

The Warriors are a very young team, starting one senior, three sophomores and a freshman, but they really know how to create pressure and make tough shots.

South Putnam held one lead in the entire game and that came on the third possession of the game when junior Katelyn Lady hit a free throw to make it a 1-0 lead.

Soon thereafter, the Warriors when on a tear, creating turnovers that led to easy layups due to their full-court press. They took a 9-1 lead, which led to an Eagle timeout.

Starting the run for the Warriors was sophomore Kaitlyn Luikart, who had five quick points en route to her grand total of 20 on 8-for-14 shooting, including 4-for-6 from downtown.

The Eagles were outscored in the quarter by 16, but they did not quit despite the deficit.

In the second quarter neither team scored in the double digits and although they trailed 27-14, South Putnam actually had the momentum going into halftime brought on by quick defensive stands that led to a 5-0 run.

"I thought defensively in the second quarter we were as good as we have been all year," Merkel said. "We got to their shooters and made it difficult for them and we were in the game at halftime."

South Putnam struggled again in the third quarter. It turned the ball over 10 times and was outscored by 23, in large part due to 18 points off turnovers for Covenant Christian.

That was all the Warriors needed to gain all the momentum and seal the game, leading 52-16 after three frames.

"It's just one of those things that the intensity level is hard to keep when you really do not have the same talent level," Merkel said. "When you have to fall back on the talent level it is awfully hard to stay in the game."

In the fourth, once again the Eagles' defense toughened up and allowed only eight points while scoring six. It was not enough, though, as the Eagle season ended with a hard fought loss.

The Eagles will lose two valuable seniors in Amanda Barnes and Aubrey Nichols.

"I see it more from the leadership standpoint. They are both good girls on and off the floor," Merkel said. "I think we are going to miss them the most off the floor in the locker rooms, getting the other girls on track and keeping them working, that type of thing. You know, it is another year. There is always somebody to replace somebody, it happens every year. You just go and put five girls out there, but the two seniors' leadership was very valuable."

The South Putnam team has much to be proud of this season, as Merkel indicated.

"We made a lot of improvement," Merkel said. "Looking back at the first day of practice to now there was tremendous improvement in the girls. A lot of people said that we would not win a game and we won four so that was a big thing."

South Putnam was the last remaining Putnam County girls' team in the tournament and the second to last West Central Conference member remaining, a credit to the Eagles' never-quit attitude.

"The thing was they never quit, a lot of teams get their butts kicked night in and night out by really good teams and they try to beat you as bad as they can. Not saying that this team tried to but we have been in a few situations like that and the girls still kept their chin up and came to practice the next day ready to practice and ready to go," Merkel said. "I am really proud of the way they hung in there and fought to improve throughout the year. They really have improved quite a bit."