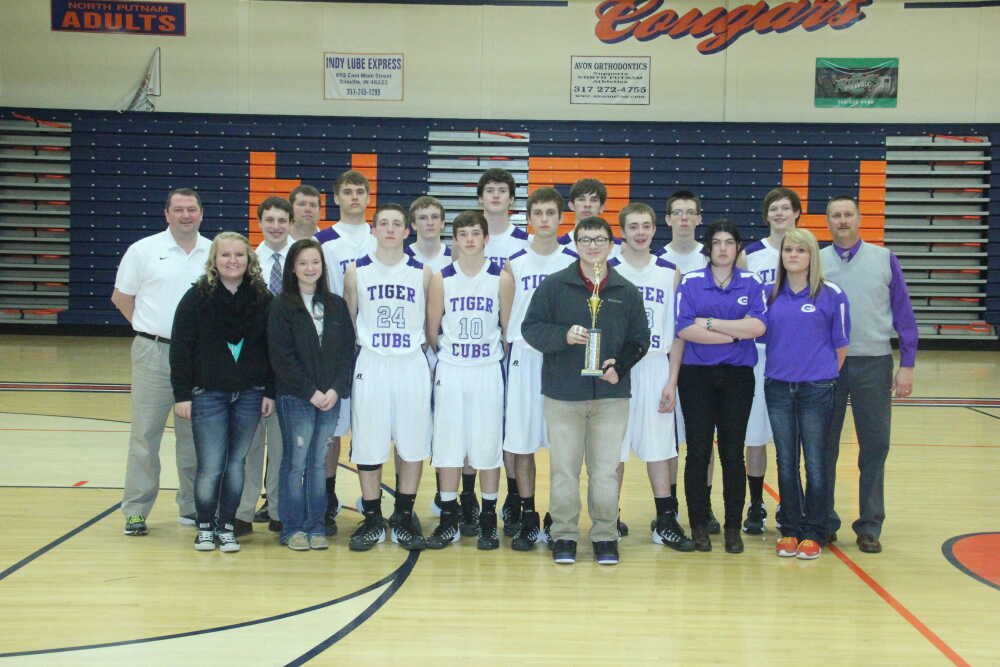 ROACHDALE -- It did not take long for the Greencastle junior varsity boys' basketball team to heat up Saturday morning at the JV Putnam County Tournament.

Rolling past Clover-dale 56-23 in the first round gave the Tiger Cubs a date in the championship round with the North Putnam Cougars, who edged out a win against South Putnam 31-22.

The momentum the Tiger Cubs had acquired in the first game carried over to the championship. The Cougars were no match after the first few minutes of the game and Greencastle was victorious, 43-31.

A sluggish start hurt both teams in the opening quarter, but Greencastle finally pulled it together and started hitting shots.

GHS went from scoring eight in the first to 19 in the second.

The pressure the Tiger Cubs forced on the Cougars gave them just the edge they needed. North Putnam could not make the passes they wanted and gave up five turnovers in the backcourt.

"Defensively, I thought we did pretty good," GHS coach Doug Hudson said. "That's what we hang our hat on. There is not a lot of times when we can come out here and score a lot of points, but our guys did really well."

The Greencastle pressure caused 13 steals and it worked in the scheme of Hudson.

"These guys didn't quit," Hudson said, "The half-court trap we ran today we work on in practice and I like to get out there and get going quick and force a lot of turnovers. Honestly, I think the kids like it better this way as well."

It was an offensive struggle for the Cougars because they did not get off enough shots and committed too many turnovers. They shot 22 times compared to Greencastle's 42 attempts and had 18 turnovers to Greencastle's five.

"We didn't execute on offense," Cougar coach Craig Smith said, "The aggressive play kind of got to us. We talked about that before the game. We knew they were going to come out aggressive. We didn't handle the press very well." 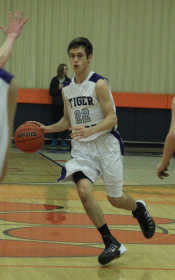 North Putnam also had problems defending the Tiger Cubs' ball movement. Greencastle's game is to drive the ball and kick it out to a three-point shooter. The Tiger Cubs had no problem completing this task and freshman Nick Costin had five of their seven threes.

"Nick is one who was an eighth-grader last year and he was a leading scorer for them every game," Hudson said. "He's struggled a little bit this year. He's jumped up two levels and he's not been able to find a rhythm. After what he did tonight, I took him out and said, 'That's what I've been looking for.' I was really happy for him."

The Tiger Cubs also had 11 assists on their 16 field goals to compliment the ball movement.

"We stress inside out," Hudson said. "We look to get the ball to the inside and kick it back out. I thought we did a really good job of that as well."

When the Cougars tried to press, Greencastle moved it up the floor quickly and created easy buckets, which led to 12 points.

Cougar junior Aaron Green came off the bench to provide some valuable minutes for his team, but his seven points and a steal were not enough.

Up by 20 in the fourth quarter, Hudson unloaded the bench. He wanted every member on his team to get a chance to score. He wanted them to be proud cutting down the net after game and make it a valuable experience to remember, he said.

The Cougars tried making a run on Greencastle, but they only could cut it down to 12, the final margin.

"They gave a valiant effort. We made a few mistakes, though," Smith said, "It cost us the game."

Unavailable to celebrate with his teammates was sophomore Zach Wilkerson, who has been a starter for the Tiger Cubs throughout the year. Wilkerson was injured during game one and was engaged in emergency dental work during the championship game.

Hudson was proud of his team and he hopes they will continue their dominance for the rest of the season.