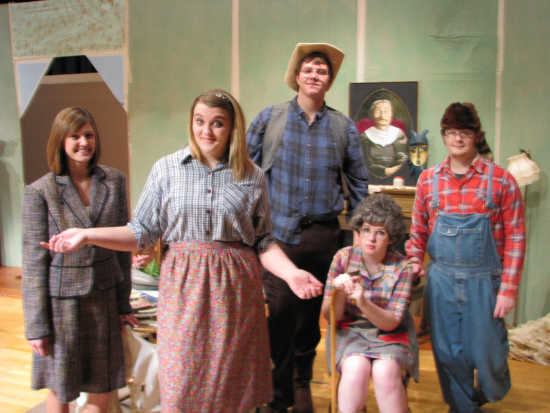 The Cloverdale High School Drama Club will present the comedy, "Hide and Shriek" this weekend.

Written by Tim Kelly, the show takes you on the journey of a city girl, June (Beka Jordan), who flees to the hills to escape from a mad woman that is trying to kill her.

Once she arrives in the country she meets up with the Dimshrouds. They make the Beverly Hillbillies look good.

Members of the clan include Granny (Deena Hesselgrave), Ada (Haylen Eccles), Ulysses (Robert St. John) and Aesop (Dustin Boothby). The Dimshrouds then talk June into portraying their lost daughter Daisy Belle in order to keep receiving checks from the government.

Things begin to unravel as June's sister Betty (Rae McFadden) shows up trying to get June to come back to the city. Then the mysterious hiker Mike (Ethan Williamson) meets an untimely death, which gets the Sheriff (Mitchell Stacy) snooping around for answers.

You will never believe how the mistaken identities play out and truths are discovered.

The student assistant for the show is Jacob Monnett, with Miranda Williams as stage manager and James Neier operating lights and sound.

Admission is $3 for students grades K-12 and $5 for adults. Curtain times in the CHS Cafetorium are 7 p.m. on Friday, Feb 28 and a special matinee at 2 p.m. on Sunday, March 9. The matinee had originally been scheduled for this weekend, but has been postponed one week due to the threat of inclement weather.

The drama club is under the direction of Brad Sandy.