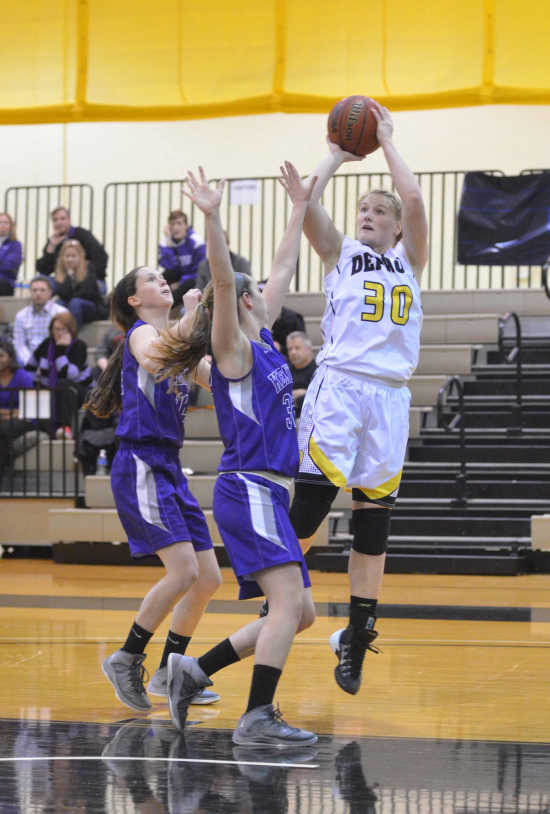 Senior Alex Gasaway puts up two of her 17 points Friday in the Tigers' 88-60 win over Kenyon in the NCAC semifinal.
Order this photo

A slow opening 10 minutes was no hindrance to No. 4 DePauw's aspirations for a third straight NCAC women's basketball crown Friday night as the Tiger knocked off Kenyon for the third time in the 2013-14 season 88-60.

DePauw head coach Kris Huffman said that getting past Kenyon was no easy feat.

"Kenyon's an outstanding team on offense and defense," Huffman said. "They play a great scheme on defense and made lanes hard to drive in so we had to shoot the outside shot.

"On offense, they have two of the best scorers in the conference and in the nation and we saw their abilities in the game.

"It took a great effort from us," Huffman added. "We had to be disciplined in our approach on the defensive end and we had to make use of the second shots we got with Alex Stephens getting on the glass."

The Ladies charged out to an 8-3 lead in the opening two minutes and prevented the hosts from gaining the lead until the 10:27 mark of the first half when an Erin McGinnis jumper gave the Tigers a 17-15 advantage.

DePauw struggled from the field early but made inroads throughout the half by bullying Kenyon on the glass.

The Tigers recorded a 46-20 rebounding advantage by the end of the contest and almost had as many offensive rebounds as the Ladies did in full.

The rebounding discrepancy kept the hosts in the game according to Huffman.

"Rebounding is such a key part of who we are," Huffman said. "Alex has a great motor and takes pride in going up on the glass. She got us several second possessions on offense and that was key during the stretch of the first half where we struggled."

DePauw scored 17 on second chance opportunities in the half and as the Kenyon offense went cold, the hosts stretched their lead to double digits on a Savannah Trees 3-pointer.

By halftime, the Tigers had gotten 11 from both Trees and Alex Gasaway to take a 40-24 lead into the break.

The hosts continued where they left off in the second half and after Gasaway hit a jumper to stretch the lead to 52-30, the game seemed to be spiraling away from the Ladies.

Only the efforts of Kenyon's Maureen Hirt prevented DePauw from blowing the visitors away in the second half.

The senior guard poured in all 20 of her points in the second half, nearly single-handedly keeping Kenyon competitive in the contest and earning high praise from Huffman.

"Maureen Hirt got busy," Huffman said. "She's one of the best players in the nation and teams have to scheme to slow her down and defend her.

"She hit some great shots even when we had someone draped all over her. Kenyon did not want their season to end and they kept coming and she kept coming at us."

In the end, though, DePauw's offense overpowered the Ladies' defense and sent the hosts on their way to a third straight NCAC conference title game.

In the midst of the scoring onslaught, Tiger senior Ali Ross became the 15th woman to score 1000 points for DePauw, joining fellow teammate Alex Gasaway on the list.

Trees led all scorers with 23 points, while Gasaway added a double-double with 17 points and 10 rebounds. Ross finished with 12 points and Emma Ondik chipped in 11.

The Tigers will not get a chance to avenge their sole loss of the season after Denison knocked off Ohio Wesleyan in the first semifinal 67-57.

Huffman said that Denison would provide a stern test for DePauw's national credentials.

"It's a huge game," Huffman said. "The winner goes on to the national tournament and Denison is an outstanding team.

"They're a tremendous defensive team. When we visited them in January, it was a battle from start to finish. We expect the exact same thing tomorrow."