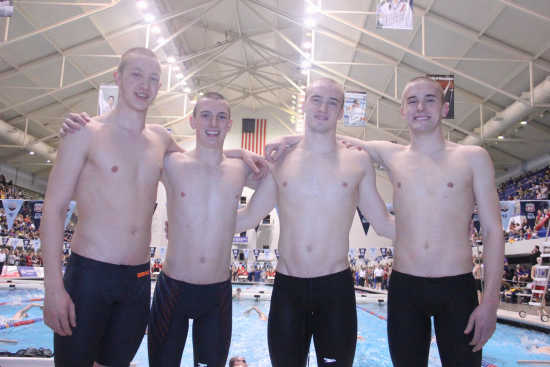 Fresh off their school-record performance in the 200 freestyle relay, the team of (from left) Nathan Gardner, Taylor Secrest, Nash Firebaugh and Elijah Brattain take a moment to enjoy the surroundings at the IU Natatorium at IUPUI. The relay concluded the season with a time of 1:29.30 on Friday, but Firebaugh will be back in the pool for the championship heat of the 100 butterfly. (Banner Graphic/JARED JERNAGAN)
Order this photo

INDIANAPOLIS -- On a fast night in a fast pool, the Greencastle Tiger Sharks were just that: Fast.

The 200 freestyle relay team of Nash Firebaugh, Nathan Gardner, Taylor Secrest and Elijah Brattain set a new GHS standard with a time of 1:29.30, breaking the previous record they set last week in sectional.

In the 100 butterfly Firebaugh also broke his school record with a swim of 50.25.

Firebaugh is seeded eighth in the event, giving him the final spot in the championship finals, set for Saturday afternoon.

"It's been a very good night for us," Greencastle coach Kent Menzel said. "One of the main goals on Friday night is to get yourself to a Saturday swim and the main way to do that is to drop time. We were able to do that both with Nash's butterfly and also with the relay.

"Both of those were new school records," Menzel said. "Nash has got himself situated in the top eight, which is the key position to be in for tomorrow."

Coming into the night seeded 26th, the relay finished in the very same spot. The key for the coach, though, was the time the four swimmers dropped and the example they set.

"The relay, while they were all able to go very fast and set that new record, unfortunately won't advance this year," Menzel said. "But I think they've set a great example for the younger guys, all of whom are here watching tonight. It's a lesson they can learn from, a great example to set. Just another demonstration of the kind of leadership that Nash and Nathan and the rest of the seniors have offered for the season."

While Friday marked Gardner's last swim for Greencastle, and Saturday will be Firebaugh's, Secrest and Brattain have one more year, and both said they want to be back in 2015 with more of their teammates.

For Firebaugh, there is one last matter of business at the 2014 state finals. By getting into the championship heat, he has a chance to equal or better his fifth-place finish last year.

"I think it's a great opportunity now to let go of all the pressure and all the tension and to just be able to get into the water and swim with reckless abandon," Menzel said. "I think that's the swim we're all looking for from Nash tomorrow."

Firebaugh has improved his butterfly finish in each of his first three state meets, from 28th as a freshman to 10th as a sophomore and fifth as a junior.

Getting back to the top five will not be easy, as each of the top five posted sub-50 second times, including a new state record of 46.61 by Aaron Whitaker of Chesterton.

Menzel believes his senior will be back for a great race on Saturday.

"It's his last swim as a Tiger Shark and I think it's going to be a great one," Menzel said.

Greencastle senior Nash Firebaugh swims to a No. 8 seed in the 100 butterfly Friday night at the IHSAA State Finals.
Order this photo