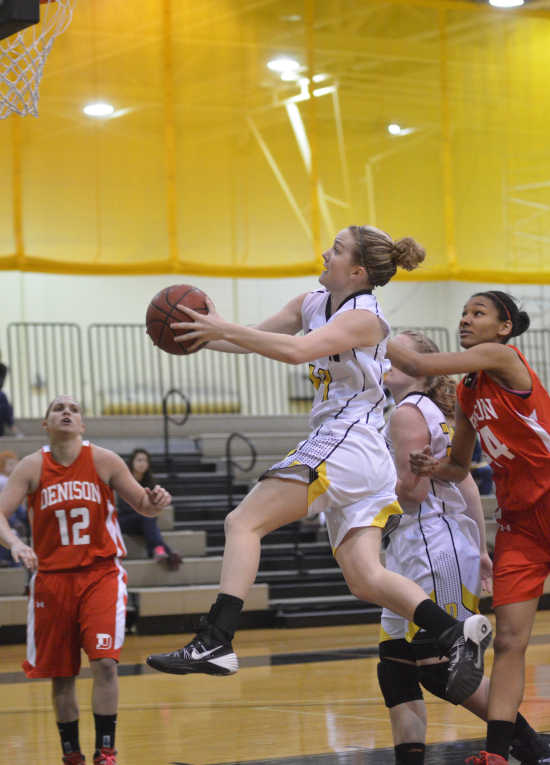 Before DePauw entered the NCAC in the 2011-2012 season, Denison's women's basketball program was the dominant force in league play, having won six of seven league tournaments.

The Big Red may have wanted to reassert itself on top of the heap Saturday evening, but the No. 4 Tigers crushed those hopes in the opening minutes en route to a 69-41 win, securing the hosts' 11th straight NCAA tournament bid.

DePauw head coach Kris Huffman said that the Tigers were ready to go from the first whistle Saturday night.

"I have a ton of respect for the entire Denison program," Huffman said. "I think they've had an outstanding year to win 21 games with a lot of new faces on the floor. That's outstanding.

"I liked our resiliency this week. We were focused, listened to the scouting report, made adjustments today and our seniors stepped up and were great leaders. I liked our team response." 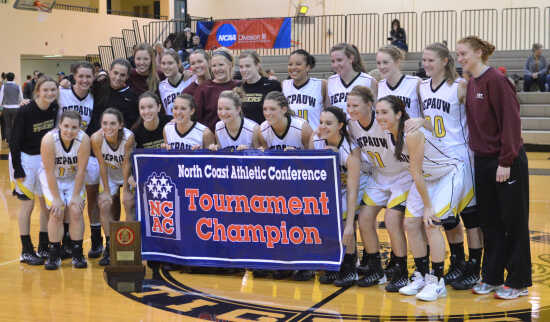 On the strength of a number of good performances, the DePauw women's basketball team celebrates an NCAC title and another NCAA tournament berth Saturday night following a 69-41 win over Denison at Neal Fieldhouse. (Banner Graphic/TRENT SCOTT)

Unlike their start against Kenyon, DePauw came out and imposed itself upon the Big Red.

The hosts scored the opening six points and quickly established a double-digit lead at 12-2 five minutes into the contest.

Huffman said getting Denison off balance was important to the Tiger attack.

"Denison is a great defensive team and has a powerful paint presence," Huffman said. "I like how we shared the basketball and drove the ball to find the open person. Our activity off the ball was a key factor.

"Our guards did a nice job of driving and kicking passes or shooting pull-up shots and also did a nice job also of keeping pressure on the defense with the dribble."

Savannah Trees in particular was up for the occasion, blistering Denison for 13 points on 6-of-8 shooting in the opening 20 minutes. 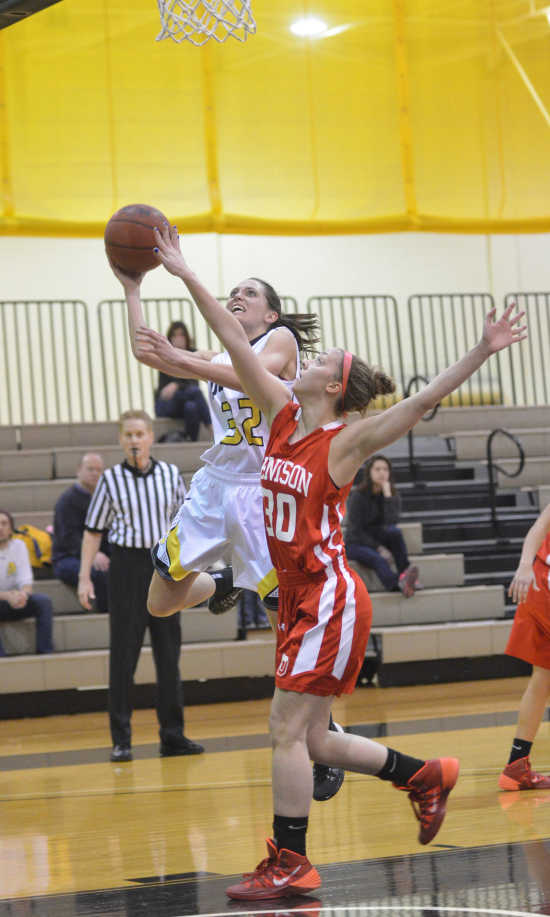 An Ali Ross three gave the Tigers a 14-point lead at 18-4 before the Big Red finally showed some signs of life.

Five different Denison players scored in a brief 13-7 spurt over the next six minutes to trim the DePauw lead to 25-17.

Two Ross free throws put the Tigers back up by 10 and Denison would not get closer than that for the rest of the contest.

By halftime, the hosts had their biggest lead to that point at 40-23 and had the Big Red on the ropes.

When Denison needed to get moving in the second half, Huffman said that her squad's early tempo and rebounding strained the visitors' energy reserves.

"They transition well but when you play back-to-back games, life is a little different from a legs standpoint," Huffman said. "We wanted to play up-tempo to try and move them for the entire game.

"We rebounded the ball well today and this weekend, and we still have room for improvement. That's an exciting thing and we'll see if we have time to get it done."

The teams traded baskets in the opening few minutes of the second period before an Alex Gasaway three pushed the lead over the 20-point mark for good at 56-34 with 11:34 remaing. 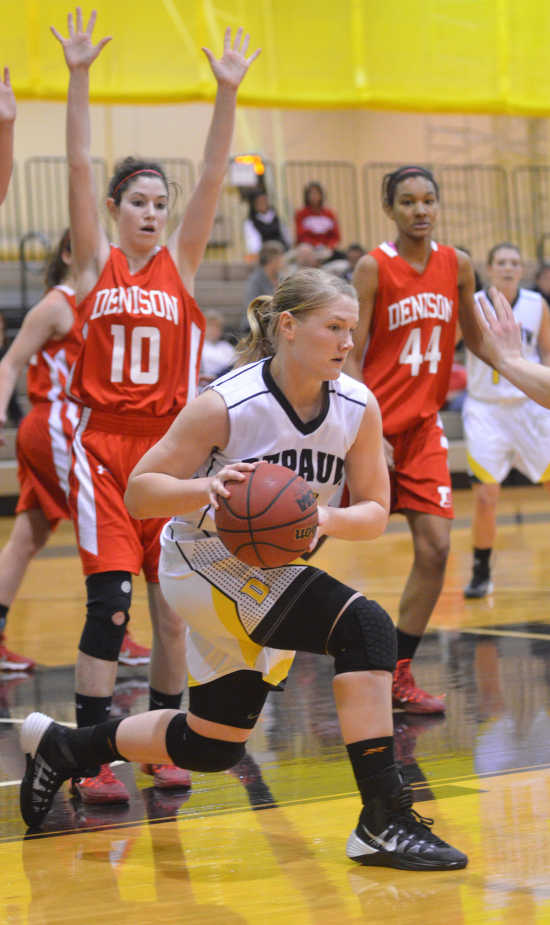 The Big Red only scored seven more points after Gasaway's shot, and the final few minutes became a formality as the hosts claimed their third straight NCAC tournament title.

Trees, who finished with a game-high 17 points, was named Nan Nichols MVP of the NCAC tournament as well as a member of the all-NCAC team along with Gasaway.

Huffman credited both players and others for continuing to keep the Tigers moving in the right direction all season.

"They've been outstanding," Huffman said. "Savannah's had a great junior year and Alex is a warrior. We could go down the roster and mention eight or nine players. Another player worth mentioning is Alison Stephens on the glass. She turned the motor on and never turned it off.

"Hats off to the entire team but those three had special performances."

With an automatic NCAA tournament berth secured, the Tigers will await Monday's draw to see whether or not they can secure another No. 1 seed and a more favorable path to another national title, including the possibility of DePauw serving as a host site in the opening rounds.

Huffman, meanwhile, said the Tigers will keep busy working on the final few details before the tournament starts next weekend.

"I guess we're chasing perfection," Huffman said. "You never catch it because it keeps moving, but we ask questions: Can we get more consistent defensive efforts? How close can we get to having a flawless game from a positioning standpoint? Can we lock down the rebounds?

"We get picky but that's what it takes to beat the great teams when games come down to a possession or two. We want to find out how good we can be possession by possession."

The 64-team Division III tournament field will be announced on NCAA.com at 2:30 p.m. on Monday. First-round games take place on Friday, March 7. 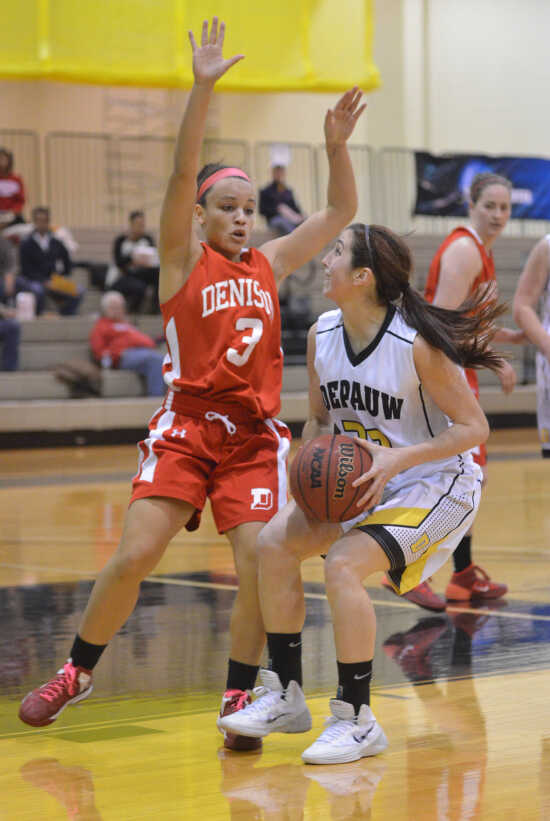