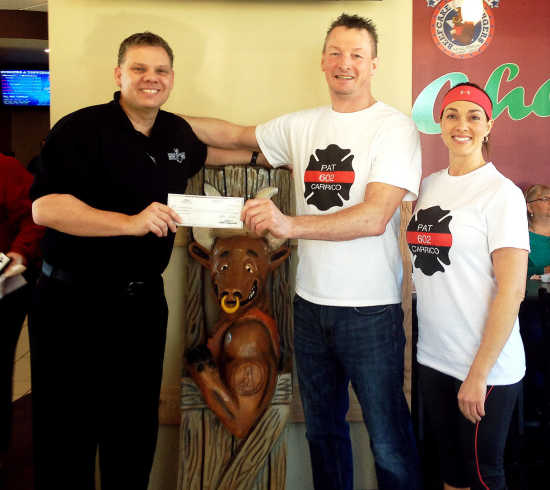 Bobby Hopper (left), representing Charlie's Beefcake Burgers in Greencastle, presents a check to Carrico Climb Team Captain Jason Morrissey and Niki St. Pierre, company team sponsor from the All-American Karate Academy and Fitness studio. Despite a big snowstorm, the fundraiser at Charlie's still raised $280.66 for the American Lung Association. A subsequent fundraiser at the Greencastle McDonald's raised $166.31 during an ice storm, while another fundraiser at The Swizzle Stick/Almost Home and raised $309 despite a major windstorm. In another effort, Teachers Credit Union (TCU) did a donation week and raised $374.46 for the cause. 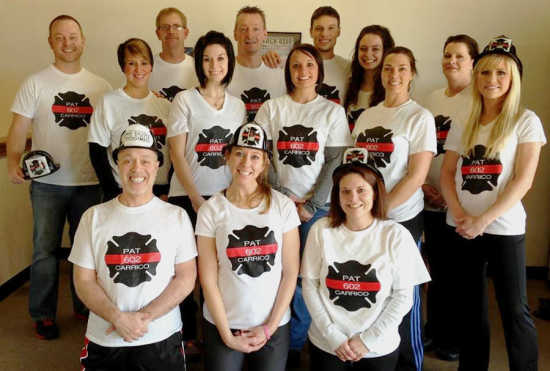 Team members honoring late Greencastle firefighter Pat Carrico by their participation in the March 8 "Fight for Air Climb" at the Indianapolis Chase Tower include Clay Gasaway, Jeff Tincher, Jason Morrissey, Zeke Williams, Sydney Smiley, Jana Sillery, Danielle Kaiser, Becky Kerr, Hollie Fowler, Joanna McKee, Niki St. Pierre, Steve St. Pierre, Rebecka Howard and Toni Chadd.
Comments
View 1 comment
Note: The nature of the Internet makes it impractical for our staff to review every comment. Please note that those who post comments on this website may do so using a screen name, which may or may not reflect a website user's actual name. Readers should be careful not to assign comments to real people who may have names similar to screen names. Refrain from obscenity in your comments, and to keep discussions civil, don't say anything in a way your grandmother would be ashamed to read.
Respond to this story